The Trocadero Tavern has been in the Hamilton food scene since 1944. On June 6th it will celebrate its 73rd year of operation. The building itself has been in the family for just as long; originally the owner Tony’s mother’s house. Currently the business is co-owned and operated by Tony, his brother, and his daughter Lois Pantalone.

When Barton was still hustling from the 40’s right up until the late 70’s and even 80’s this was the place to go for dinner, dancing, and live music too. It was also the first restaurant that had a proper pizza oven serving up real pizza in the city. Imagine that.

Although the building’s exterior has seen some changes over the years the interior is essentially frozen in time. The booths in the main part of the restaurant (built by Tony) are warmly lit with hanging stained glass pendant lights flanked by lace curtain dividers. 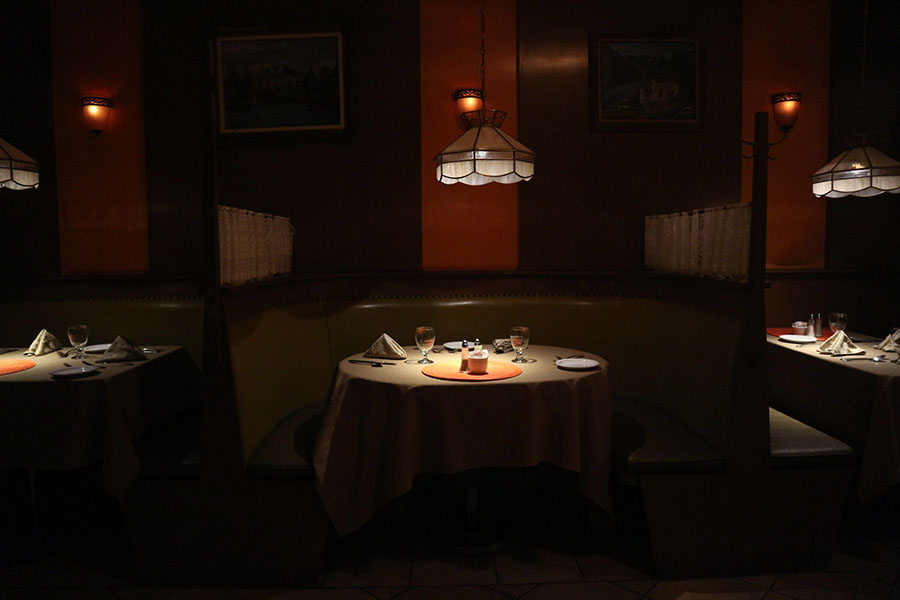 On this visit, I went with a larger party of seven. Most ordered using a Wagjag special, which offered a five-course set meal for $110 for two people. Others ordered à la carte, not being able to resist trying items like the steak, ravioli, or lasagna that were not on the set menu.

You can purchase the deal via Wagjag on their site, or while at the restaurant (just let them know in advance and they will honour the same deal in house).

The set meal started off with a basket of fresh and warm garlic toast, followed by bruschetta, an antipasto and charcuterie platter consisting of a selection of cured meat, olives, generic cheese cubes and what I might guess were frozen mini-quiches (which was mildly disappointing) and salad. The mains followed suit with a choice between three different dishes, salmon, veal, and chicken (the mains on the set menu do seem to change up regularly).

The food was hot, fresh and everything was great. My favourite was the caesar salad; the polenta croutons and prosciutto bits -awesome! We all enjoyed our meals, but for certain, we were mostly smitten with the restaurant itself (its other worldly atmosphere), and just being able to experience such an unchanged Hamilton relic in the midst of all that is new and seemingly ever changing in the city.

The meal from start to finish took about two hours. It ended with a tower of the frothiest cappuccinos and the Trocadero phyllo pastry banana foster split.

I would love to go back and try their crab cakes, arancini, and spaghetti and meatballs.

For the duration of the dinner it felt as if we had the restaurant all to ourselves, with the exception of a table of four that were finishing their meal as we arrived, and then a gathering of four that came for a late dinner just as we were leaving. Besides the two parties it was pretty much empty. I can only imagine what it must’ve been like selling out of pizza pies and meatballs back in its glory days.

The Trocadero is only open on Friday and Saturday evenings, and they are closed during summer months. I recommend calling to make a reservation so you aren’t disappointed if on the odd chance they happen to be closed.

There is no website and you won’t be able to find a menu on-line.

This is a great spot; a total Hamilton gem, perfect for trying something new, or for some, revisiting an old classic. Go with expectation of experiencing “dinning out” from another era. I highly recommend it. I can only hope that the Trocadero Tavern will be around for many more years to come.