Have you ever heard of a house that has it’s own hashtag? Architect Agata Mancini’s house does. The #greendoorhouse stands alone as a contemporary splash on a historic street. 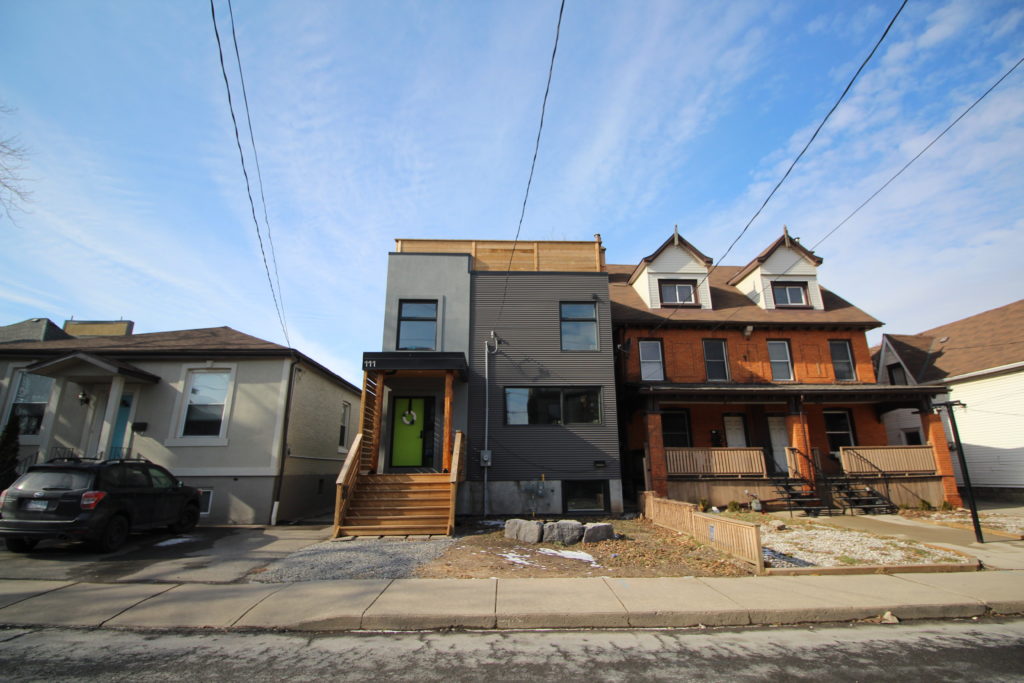 Agata and her husband Tony bought the property on Catherine Street North in October 2014. What they originally bought was a small wood cottage built in 1887 with a lot of issues, but they couldn’t resist the price. They got in on Hamilton’s hot market at just the right time, a time when the Beasley Neighbourhood was still being overlooked for ‘hoods further west.

They knew they hit the jackpot. After purchasing the house, they decided to demolish and build something new, designed by Mancini herself for her young family.

The site was constrictive due to its size, which forced many iterations in the overall composition of the house. No matter what changes were made, the main aspects she was going for was a house filled with light and openness, as well as livability. She wanted their house to have impermanent spaces for her two kids, compactness for the size of the lot, and a minimalism to the interior. 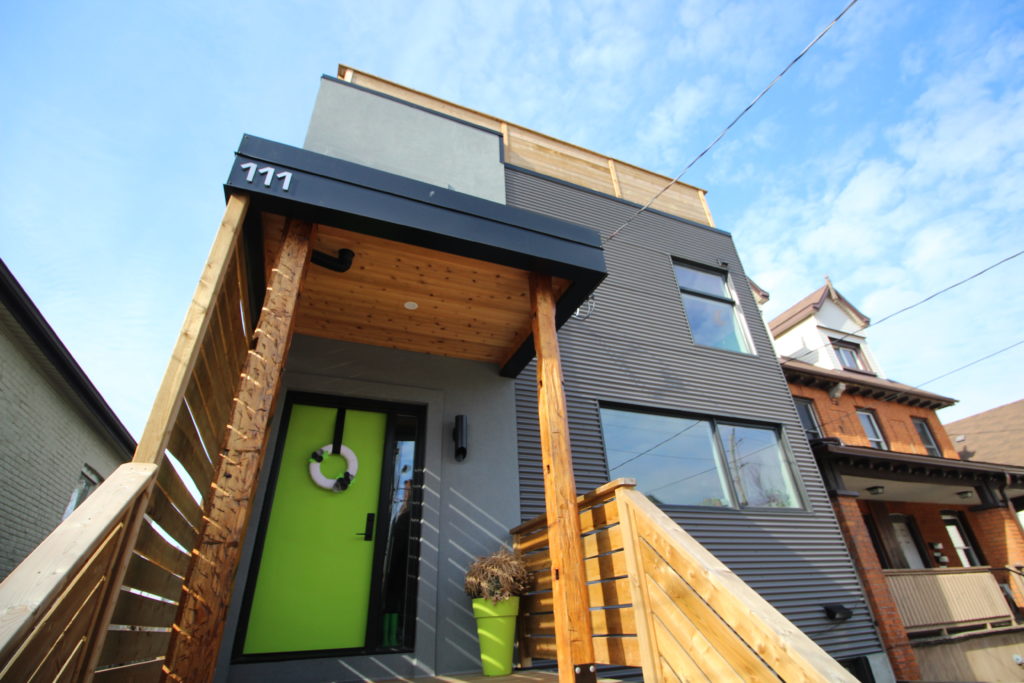 The exterior is very volumetric, an envelope with a story inside. The boxy house is clad in grey stucco and black corrugated metal, and has a prominent porch accented with wood slats and the recognizable green door. Windows dot the façade in a calculated way. 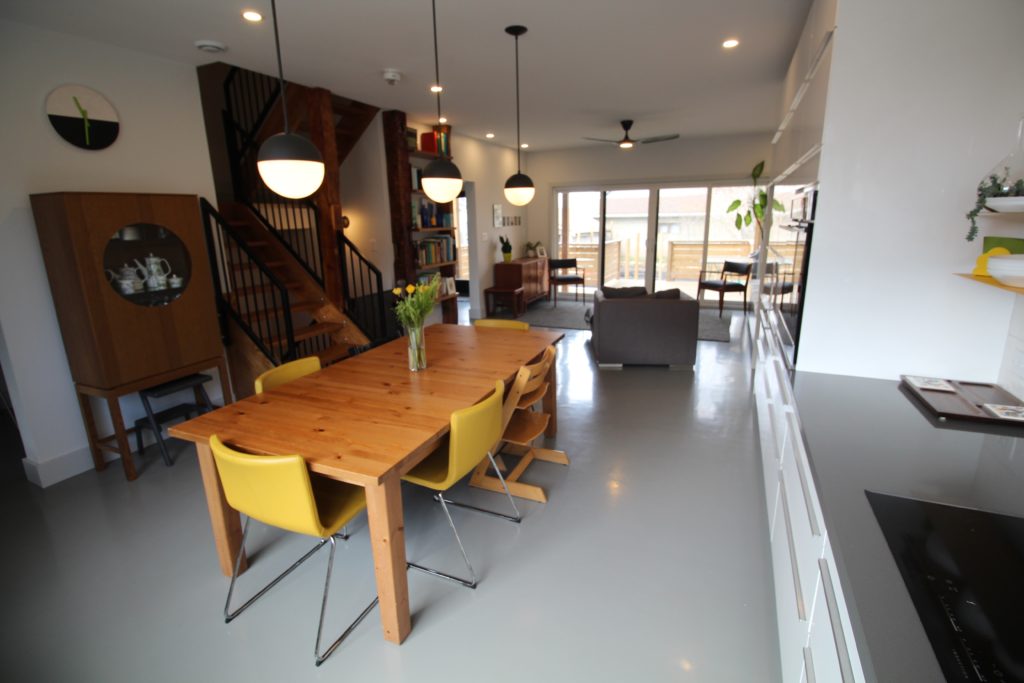 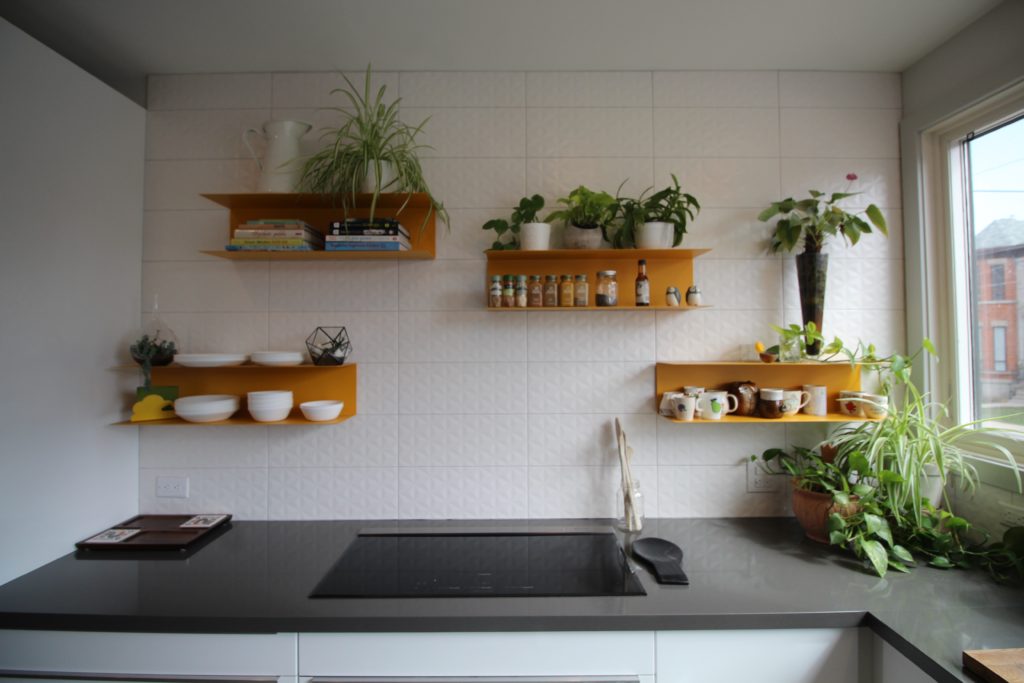 Inside on the main floor, the kitchen has ample amounts of workspace, both with the countertops for meal preparation and the communal table. A Centura 3-D white tile accent wall with floating yellow shelves compliments the IKEA cabinets in the kitchen. Cleanliness and simplicity is a continuous motif throughout the house and its immediately apparent with the grey poured epoxy flooring. 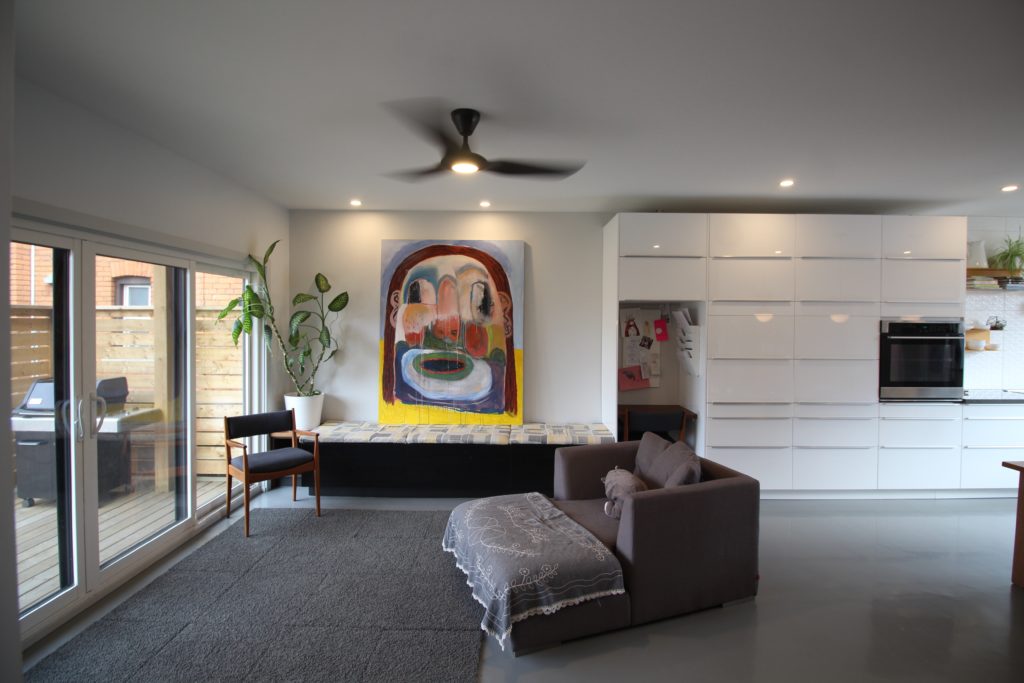 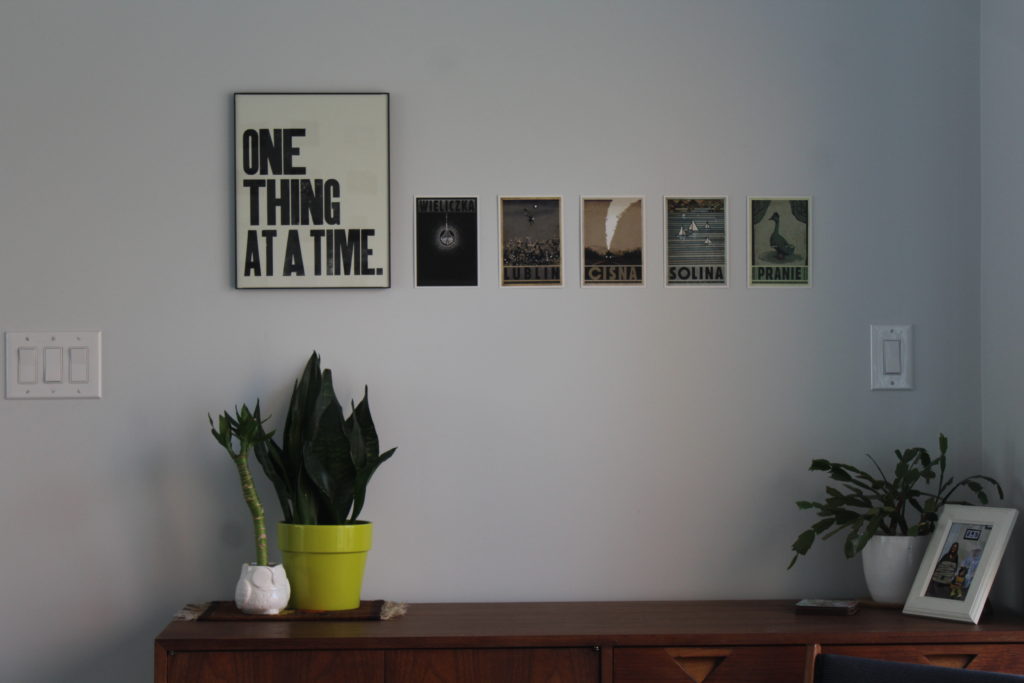 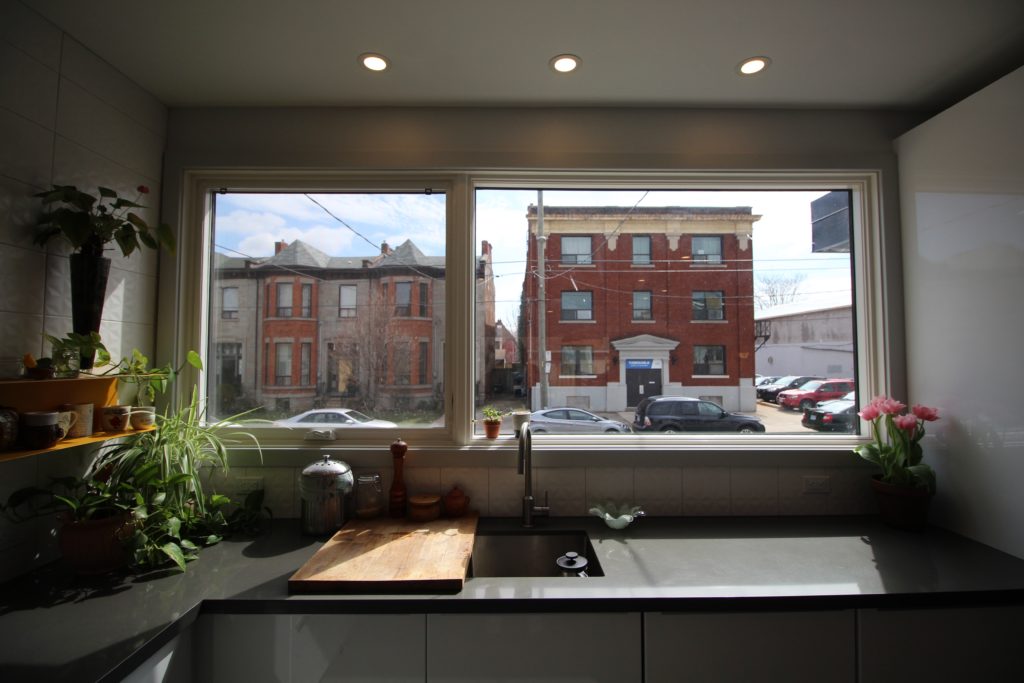 The living room and kitchen meshes into one space in an open concept. Filled with light during all hours of the day, and a horizontal band of windows above the kitchen sink which frame the streetscape outside, it’s the perfect place to be with the kids while also tending to other matters. There is also a bookshelf and plenty of storage throughout the living area with access to the backyard.

A recognizable feature before making the ascent to the second floor is the repurposed beams from the original house, which were restored and connected via scarf joints. The stairs are riser-less, castings rays of light against the walls at each floor. 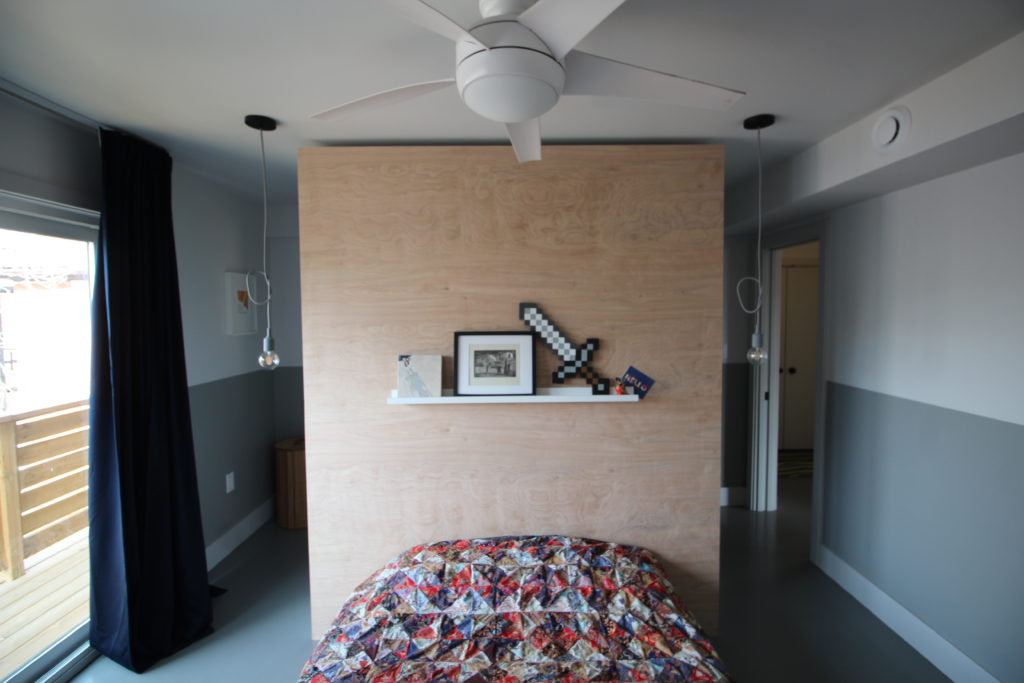 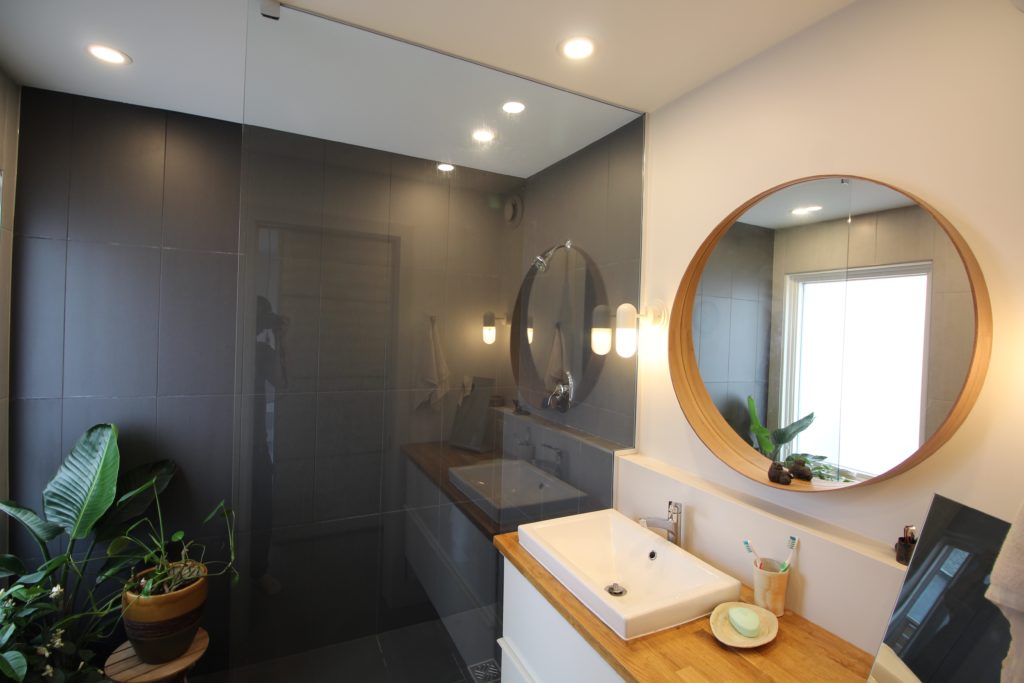 Upstairs the second floor is simple. Four rooms. A family connected. The master bedroom is cozy and includes an ensuite bathroom and balcony. There is still one more climb to make to the rooftop terrace, which will be used for entertaining. Plans are still in the works for the space, but it already has splendid views of the city’s skyline to the West.

Since its completion Agata has opened her own firm, Assembled Light Architecture & Design Studio.