Selling Our Future for $2

Safety is priceless. However, in Dundas, it’s being sacrificed for as little as two dollars.

According to Councillor Arlene VanderBeek and city staff, that’s how much it might cost a private resident to purchase a neighbourhood laneway in a historic part of town. 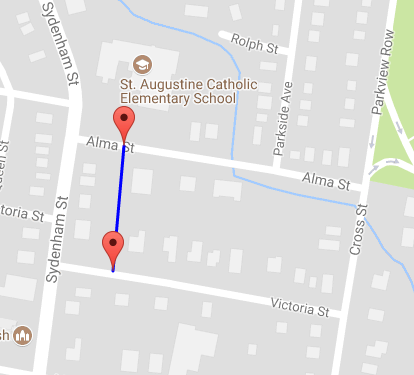 The laneway in dispute, which runs between Alma Street and Victoria Street, has been a path used by students, parents, teachers, and neighbours alike for decades.

Now it’s potentially going to be in the hands of one man, Len Medeiros, after a decision yesterday by council.

This decision would be detrimental to the fabric of the neighbourhood and is wrong.

Are we overreacting? Not one bit. The reaction by the community to save this laneway is inspiring and critical. It’s the potential “owner” who is overreacting with selfish NIMBYISM. You say, “Get off our driveway.” Instead, how about you share the laneway? Since that’s exactly what it is and should be: a shared piece of public land.

I went to elementary school at St. Augustine’s and that path was frequently used by just about everybody attending the school who lived within walking distance. Parkside High School students also used to the path, when there still was a Parkside.

This laneway was an important safety mechanism for students. Until recently Sydenham, which runs parallel to the laneway, had little to no traffic calming measures. Cars would come barreling down the escarpment, passing by the elementary school at over 60km/h where the hill meets Alma Street, right at St. Augustine’s.

Finally stop signs and fresh zebra crossings were recently installed. There have also been knockdown sticks added along the sidewalks for more safety measures. Why it took this long we’ll never know.

But these are just consolations, because when it comes down to it, Sydenham is still a very dangerous road. The sidewalks are narrow, the traffic is intimidating and unpredictable, and the noise is still considerable. It’s no place for children, or even adults. Sydenham desperately needs even more traffic calming measures.

The laneway negated these issues. Yes, it’s only a block long, but it has always been used as a safety-first detour that offered children and neighbours a scenic route in the process.

Clearly the neighbourhood looks upon it as integral asset to their community. A local resident, leading the fight, presented over 650 signatures to council in a petition to keep the laneway public. Those voices should be heard.

It’s funny, because as Samantha Craggs stated in her article yesterday, the city is now looking at ways to utilize public alleys as urban trail systems and they’ve started a pilot project to improve the use of downtown alleys. Which VanderBeek supported. Such mixed signals.

At the end of the day, this issue isn’t just about safety; it’s about the connection, the community, upholding local heritage, and planning for the future. What kind of lesson would we be teaching our children by allowing such a selfish purchase?

Let’s hope this fight is still not over.