(Above: Florence Lawrence appears in the 1912 film After All. Wisconsin Center for Film and Theater Research [Public domain], via Wikimedia Commons)

When Florence Lawrence — known to some as Hollywood’s first movie star — died 80 years ago today, she was barely mentioned in either of her hometown’s daily newspapers, The Hamilton Spectator or the Hamilton Herald. In fact, despite starring in more than 300 movies, newspapers and movie magazines across North America largely ignored her death. The 52-year-old actress, once beloved for her cherubic face and versatility on screen, had been mostly forgotten by the time she was buried in Hollywood Forever Cemetery near the likes of entertainment-industry royalty, including Cecil B. DeMille, Rudolph Valentino, Johnny and Dee Dee Ramone.

Florence Lawrence was a pioneer in an industry that simply didn’t exist when she was born in Hamilton in January 1886, almost a decade before the Lumière brothers’ short films screened in Paris in 1895 and five years before Thomas Edison filed the patent for his camera (the kinetograph) in 1891. Born Florence Bridgewood (also Bridgwood), she was the seventh child of George Bridgewood, a carriage maker, and the third child for his second wife, actress Charlotte (Lotta) Dunn. Dunn was only 19 when she married the 54-year-old widower in Hamilton on December 13, 1880, two years after his first wife, Ellen, died of breast cancer.

When lists of famous Hamiltonians appear, Florence Lawrence’s name is rarely on them. Despite being born in Hamilton, Lawrence spent most of her young life travelling around North America with Lotta as part of the Lawrence Dramatic Company, which inspired her new last name. George and Lotta separated early in Lawrence’s life, and with a knack for song and dance, even by age three, she was “born to perform.”

Lawrence’s relationship with Hamilton was flimsy at best, even lying on a marriage certificate later in life, stating she was born in Buffalo. Yet despite her disconnect, the Bridgewood family was deeply rooted in Hamilton. In fact, it was front-page news of The Hamilton Spectator in 1898 when George Bridgewood died suddenly in his home at the rear of his carriage shop at 46 Jackson Street East. The headline boasted, “Suffocated By Gas: Such is Believed To Be the Fate of Geo. Bridgewood, Found Dead To-Day.” Bridgewood was 78 years old when Hugh Shaw, a blacksmith, went to Bridgewood’s house, where he lived alone, and looked through the window, to see George on the bed. He returned with police, who broke into the home, to find Bridgewood dead. “The house was filled with coal gas from the self-feeder in the next room, and there was every indication that the deceased had been suffocated by the gas,” reads the article, which mentions only Bridgewood’s three sons — James, William, and John — and his daughter, Charlotte Holcomb, from his first marriage. He was buried in the Hamilton Cemetery alongside Ellen.

In the introduction to her book, Florence Lawrence, The Biograph Girl: America’s First Movie Star, author Kelly R. Brown asks, “So why write a biography of a woman whose life, with its dizzying ups and downs, was ultimately tragic, whose works have been lost and largely forgotten, whose existence seems barely remembered by the industry that made her famous? Quite simply, because Florence Lawrence’s story begs to be told.”

In the smallest dribs and drabs, Lawrence’s story has been told, most thoroughly in Brown’s book. However, most recently, Vanity Fair published an article called “Introducing Florence Lawrence, Hollywood’s Forgotten First Movie Star,” which tells us not only about Lawrence’s early acting career, but also the anonymity of women in early Hollywood.

“A fair-haired, bow-lipped vaudevillian with a cleft chin, Lawrence began her acting career without fanfare in 1906. She remained anonymous while working for Thomas Edison’s studio and then D.W. Griffith’s Biograph Company. Even by 1909, after she had appeared in 50-plus one-reelers, Lawrence was known to her adoring public not by name, but as ‘the Biograph Girl’.” Soon she became the face of the newly formed Independent Motion Pictures, known as IMP,” who revealed Lawrence’s name for the first time: “Known until then only as the biograph Girl, Lawrence suddenly found every paper was writing stories about the only person in the industry they knew by name. Suddenly she had shot from being the Biograph Girl to the first real star of the film world,” writes Charles Foster in his book Stardust and Shadows: Canadians in Early Hollywood.

Florence’s stature in Hollywood rose at a time when moviegoers became hungry for celebrity. By 1910, Lawrence’s train pulled into the St. Louis’s Union Station, “and the surging throng that greeted her was so rabid that they stripped buttons from her coat,” writes Margaret Heindenry in Vanity Fair. Lawrence was also “one of the first women to found her own production company; she also invented the “auto signaling arm”—a precursor to car turn signals.”

Lawrence was married three times and suffered from a progressive bone disease. In 1924, she underwent plastic surgery in hopes of a comeback that never happened. “By 1927, talkies forever changed cinema, and soundless faces like Lawrence’s faded away,” writes Vanity Fair.

By 1931, Lawrence is mentioned only in passing as a “pre-war favourite” in a Macleans feature article on Canadians in Hollywood, which included Norma Shearer, Mary Pickford, and Fay Wray; however, Lawrence undoubtedly paved each of their ways. When Lawrence died by suicide in 1938, her funeral was paid for by The Motion Picture Relief Fund, run by another Biograph girl, Mary Pickford. Her grave in Hollywood Forever Cemetery (which is also the final resting place of another notable Florence from Hamilton — suspected murderess Florence Kinrade) was unmarked until actor Roddy McDowall purchased one in the early 1990s.

According to Charles Foster, “Not one of the silent films Lawrence made has been transferred to video,” making her work remarkably difficult for film lovers to access. (However, since Foster’s book was published, a number of Lawrence’s films have been digitized by the Library of Congress and a few are viewable on YouTube). “Ironically,” he writes, the ‘first star’ of the motion picture industry does not have a star of her own on Hollywood’s Walk of Fame.”

Upon Lawrence’s death, Mary Pickford, another silent-era Canadian often credited as the first movie star, had the following to say:

“She was by far the best actress in the early days of Biograph. Many of us learned from her the craft that has given us so much over the years. That she should need to end her life in this way is very sad. But there is only so much pain one can endure. I have lost an old friend, a very dear friend. The industry has lost a great talent.”

Though Florence’s name has largely been lost in history books and local lore, her work helped to shape a fledgling industry, alongside many other nameless women. The dedication in Kelly R. Brown’s book is especially impactful:

“Thanks to all the women who proudly posed for those early flickers. Your names may be lost, but your spirit lives on,” she writes. 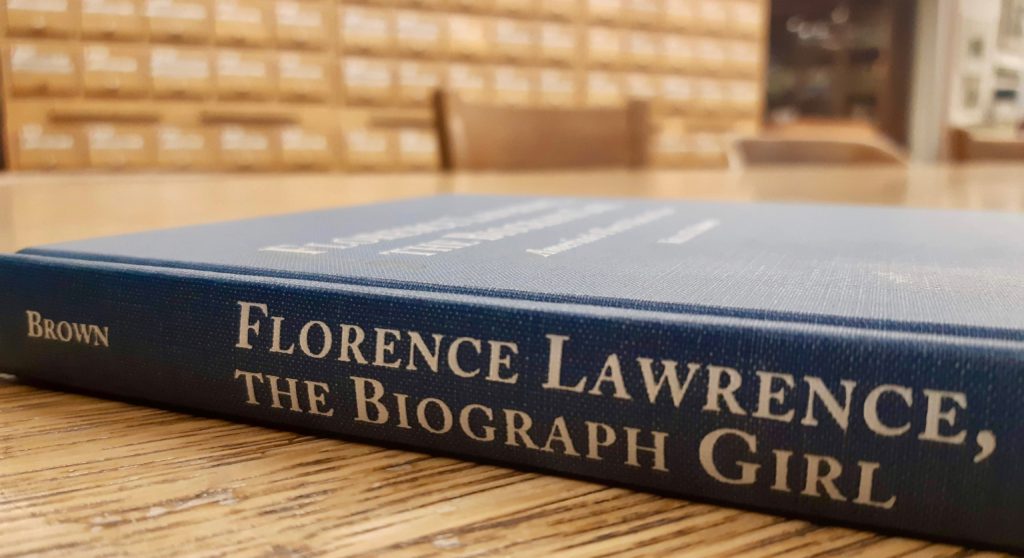 0 0 0 0
Previous ArticleBest Things To Do In Hamilton This Week - December 20 Edition
Next ArticleMusic, meaning and community with Kojo Easy Damptey
Comments (3)
Latest Posts