Hamilton is changing. We all know this. If you’ve been paying attention to Hamilton, this isn’t anything new. The city just announced that it hit a record-setting milestone of over one billion dollars in building permits within the last nine months. Downtown has a pulse it hasn’t seen in decades. There are more cranes in the sky and developments than ever before, but did you know that’s just the tip of the iceberg? From high-rise, to mid-rise, to townhouses, commercial properties, institutional buildings, and other infill projects, Hamilton will be seeing a lot more when it comes to construction time; if and when these developments get there.

This series will be taking a look at each of these developments.

We’ll start with a list of high-rise residential projects (anything over 11-stories) in different phases of development. Some are currently under construction, while others are just going through various stages of proposal. At this time none of the proposed developments will exceed 40 stories, and many will look different from the initial renderings (which is why the author reserves judgement).

Special thanks to David Capizzano for his enormous contributions to this article.

Here’s a look at the developments:

A development that could potentially invigorate a stagnant node in West Hamilton, this student residence will bring more than just towers to Main and Longwood. The plan is for a mixed-use complex, with a four-storey podium for commercial space at the base of both towers. There is also a plan for the lands to the south as outdoor space and sports fields. There are 457 units, 107 parking spaces, and 50 bike spaces planned for this development. A much needed expansion for the ever-growing Columbia College and their struggle to house many of their students. 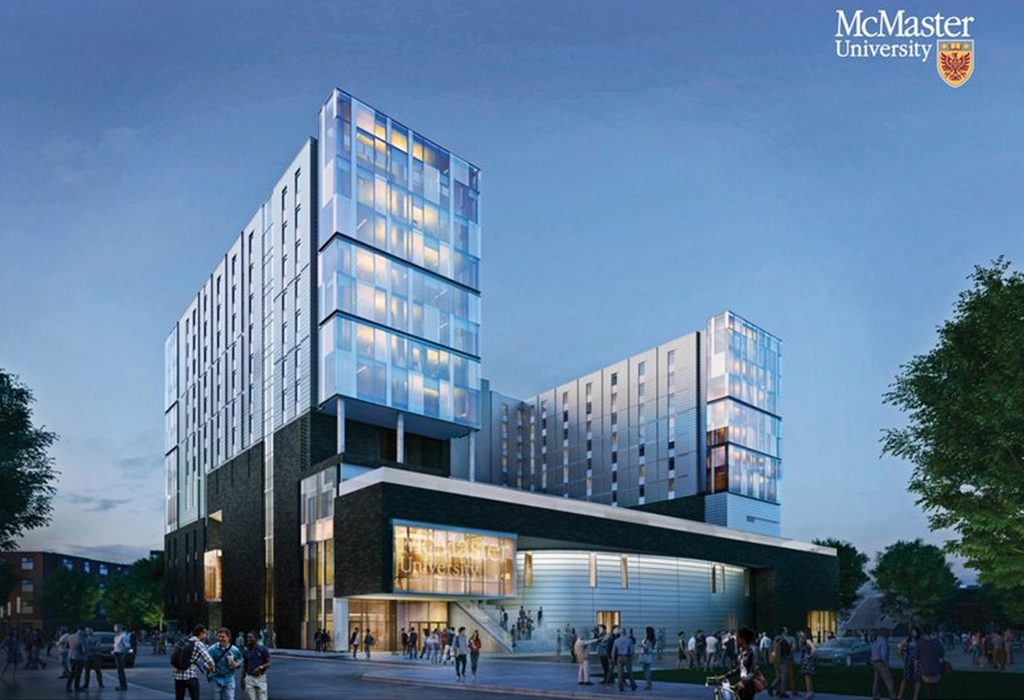 This 359,000 square foot student residence named in honour of late McMaster President Peter George and designed by Toronto firm Diamond Schmitt, will also house classrooms, a food centre, childcare, and a student wellness centre. The building is also going to be LEED Silver. It’s located across from Ron Joyce stadium, where the two quonset huts once resided. 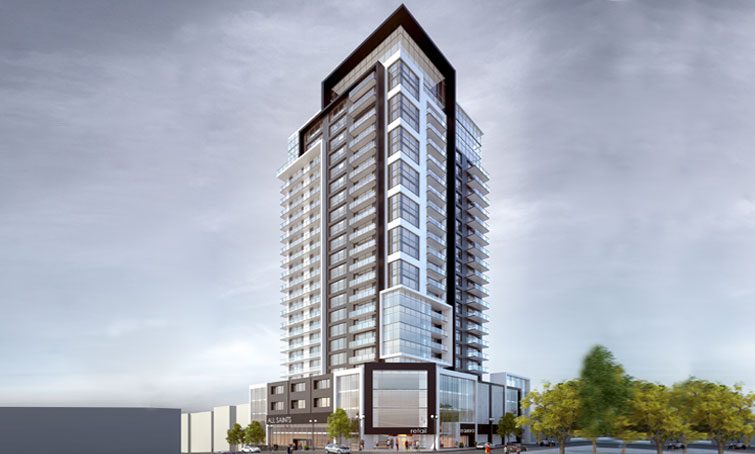 A 23-storey condo at the corner of King and Queen, Platinum Condos will be mixed-use, with a new 6,000 square foot All Saints Church (which will have space for community events) situated at the ground floor of the 4-storey podium along King Street beside commercial business space. Entrances will be located at both King and Queen Streets. It will have 212 condos and 170 parking spaces distributed between one below-grade parking level and four-above grade levels.

Located where their outdoor pool currently resides, this 18-storey, 93,000 square foot addition to the current 15-storey midcentury tower will have 167 rental units (with 7 designed for students in mind), 73 parking spaces, and a one-storey podium connecting to the current circular breezeblock podium. The podium will have indoor amenities complete with a gym, party room, and lounge, while the rooftop will provide outdoor amenities (hopefully a new pool). 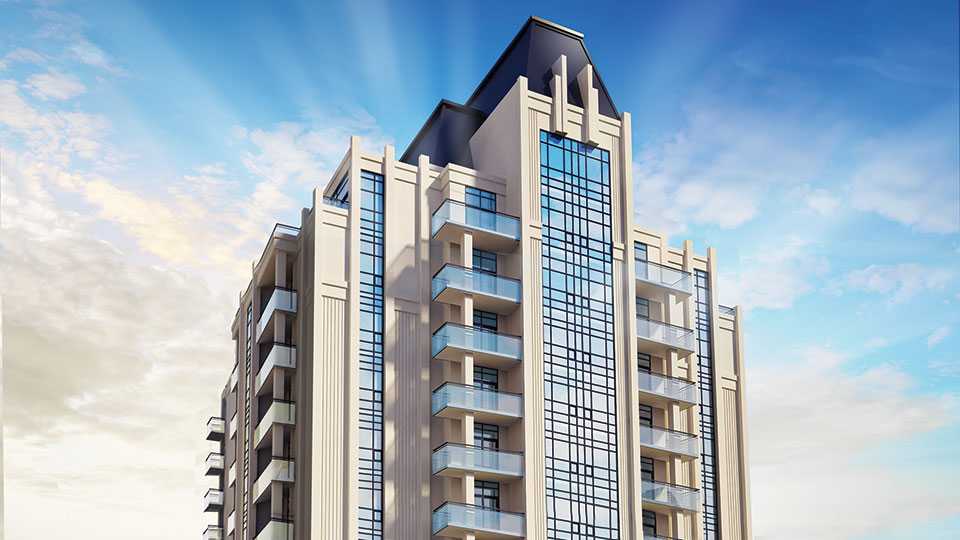 The third phase of City Square has been rebranded as The Gatsby. It will look identical in design to the previous two phases, and will complete the complex situated in the heart South Durand. The Gatsby will have 102 units ranging between 522 and 1,000 square feet. It is slated to be complete by Fall 2019.

A controversial development because of its height and Toronto developer, Television City is the most talked about development since The Royal Connaught. Two tall slender towers would add a contemporary splash amongst a cluster of midcentury high-rises in Durand. Connected via a two-storey podium, the predominately glass towers will feature 17 different floor plans, each named after different celebrities. The suite options will include studio, one bedroom, one-plus-den, two bedroom, two-plus-den, three bedroom, and penthouses. Prices are expected to start in the $220,000s. Television City is expected to be complete by 2022.

Another development to be added to the Vrancor cluster that includes Homewood Suites, Staybridge Suites, 150 Main, and Bella Tower. At 32 stories, the 230-unit tower will have a 7-storey podium with three commercial spaces at grade, two levels of commercial parking, four levels of public parking, and two levels of underground parking. Completion is scheduled for 2019.

The rebirth of the Tivoli Theatre would also mean a tower on James Street North. Planned for 22-stories with 100+ condominiums, the current rendering of the tower features staggered, offsetting balconies, and a slim, needle-like profile. However, there is discussion of a redesign, so look for those to unfold as the project progresses. The three-storey podium will have a new entrance to the Tivoli theatre beside the condo’s entrance and commercial space. Restoration is already in the works inside the Vaudeville style Tivoli Theatre.

Sonoma Development Group shocked some with this announcement because of its location, its design, and its height. A visually striking tower, with sinuous curves and lilly pad-like columns at its base, this proposed development is located amongst numerous parking lots in the Beasley Neighbourhood. The 40-storey tower is planned to have 371 residential units, 350 parking spaces between two underground and three aboveground levels, and over 13,000 square feet of commercial space.

This development is a testament to the impact of the rebirth of King William. The towers have gone through several revisions, but currently there are two 30-storey towers planned for the site. One of the towers will be condominiums, while the other will be rental units. The former Kresge building is being partially restored back to its Art Deco glory, with a newly imagined exterior and an additional box of glass bays making the podium 5-stories. There will be plenty of commercial space: approximately 1,869 square meters of it. The development will have 2 below grade and 5 above grade parking levels with 420 parking spaces.

Initially it felt like this project was going to take forever because the large vacant gap tooth on James Street North was so noticeable, but it’s almost done. This pin-striped spandrel, mixed-use tower with its splash of colours is geared towards students.  It has 146 multiple dwelling units with building access at Rebecca Street. Facing James, the old four-storey William Thomas Building is being recreated with its original 9-bay stone facade and will have room for commercial space. 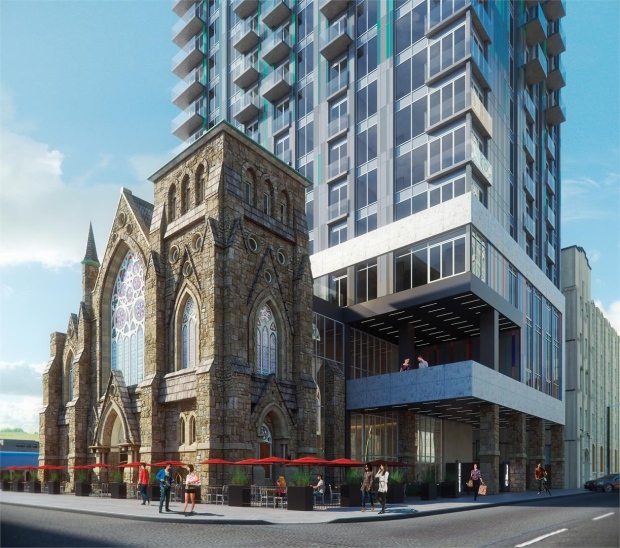 A development that seems all but dead, this proposal included a 30-storey tower connected to the remaining façade of James Street Baptist Church. They tore down 80% of the historic church for the highly hyped development and the facade was to be connected to a podium with lobby and commercial space along Jackson Street. There were to be 259 condos and 11 different floor plans ranging from 451 to 2,077 square feet. Prices were to start at $229,000 and completion was scheduled for 2019. Except Stanton Renaissance went bust. Hopefully another developer picks up this proposal. We tore down a church for it.

Will the old Shell location at the South-East corner of Main and John finally see a high-rise? Potentially. A development attempting historicism with a tripartite design, The Oxford plans to use texture precast, brick, and architectural block for its materials. It will offer one and two bedroom “executive” suites.

Here is a map indicating where these developments are located:

This is the first in a series of posts about planned Development in Hamilton. Stay tuned for the next post of mid-rises.