Greetings From The Dill

Throughout the year 2016, prolific Hamilton musician Dylan Hudecki a.k.a. The Dill embarked on an ambitious project – releasing one song a week over the course of 52 weeks. These tracks were a culmination of 18 years’ worth of crafting songs, in between a busy life of co-founding Junior Blue with Broken Social Scene drummer Justin Peroff, touring the world with Toronto band By Divine Right, and making music with brother Jackson as Cowlick, all while holding down a day job as a teacher and raising three kids.

The physical result of The Dill’s year-long release, called 52, was just as ambitious. The songs were released digitally, accompanied by a deck of cards, each card representing a different tune. Dylan asked local visual artists to design each playing card to compliment each song. “It was like a giant puzzle, putting the whole thing together,” reflects Dylan. 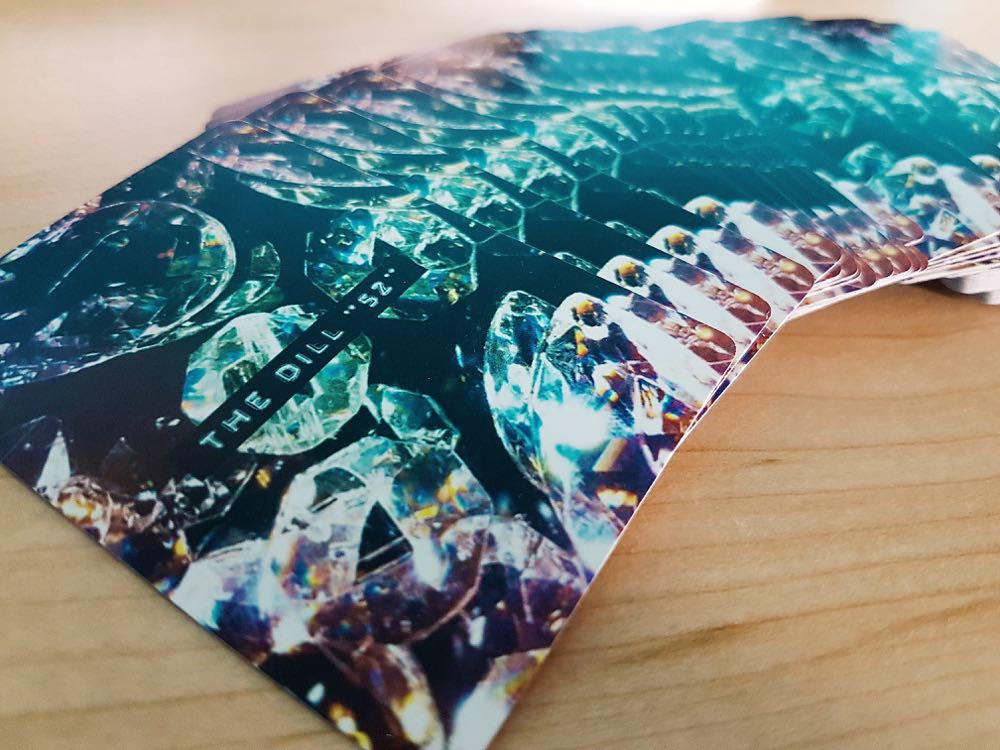 From there, 52 was whittled down to 12 to make up The Dill’s debut solo album, Greetings From (available now on vinyl in local record shops Dr. Disc, Cheapies, Into The Abyss, and Revolution Records and you can can also stream on Spotify and others). Going from 52 to 12 songs was no easy feat. Sonically, the 52 songs span genres and moods, and could have been grouped together to make several different incarnations of Dylan’s first solo record.

“I could have made an alt-rock record, or it could have been a lot more electro. I had some harder tunes, more grungey, and I had some really quiet, finger-picking songs,” describes Dylan. “I just decided on a buffet, to have a bit of everything; what songs I really liked to listen to over and over again.” Teaming up with a record label, Greetings From came to be. It’s an apt title to re-introduce Dylan as a solo artist.

Having played in bands over the years, it was a daunting process to set out to create a solo effort, knowing firsthand how tough it is to be back on that grind of promoting an album. “The actual making of a record is really fun and rewarding,” reflects Dylan. “I was always nervous about making a solo record because once it’s done, then it’s a really uphill battle. You’re starting fresh and you have to make a name for yourself, play a million shows… it has to be a labour of love.”

Dylan continues to reflect on today’s climate of supporting live music: “Everyone is vying for the media’s attention, and the listener’s attention, and everyone’s playing shows. A lot of people aren’t going to shows because they’re on Netflix and chilling or they’re on their phones sitting on their couch, not investigating and supporting local and finding something new. That’s the reality that comes along with releasing a record,” he says while acknowledging having the help of a label and publicist helps a great deal in getting your music out there.

“And then some people just make their art and put it up, and that’s it, like ‘let’s see what happens,’ and that’s great too. There’s also nothing wrong with just jamming. Doing it for the love of music and collaboration.”

The Dill also got by with a little help from his friends when creating this collection of songs. Collaborations run deep throughout the record and it’s a real who’s-who of Canadian indie music once you start to dig. On “Stop Time” we hear the croon of Max Kerman (Arkells) front and centre, but that’s not all. The “doo-whop” singers who accompany him are Luke Lalonde (Born Ruffians) and Jose Contreras (By Divine Right). “It’s kind of a super group. Those are some pretty big singers in their own right. I don’t even think Max knows that those are the two singers; I’ll tell him when I see him next time,” Dylan says with amusement. Further collaborations include Sarah Harmer, Brendan Canning (Broken Social Scene), Brian Borcherdt (Holy Fuck/Dusted), Jay McCarrol (Brave Shores), and more.

The Dill celebrates the release of Greetings From this Friday, August 17th at The Casbah ($10 ticket or $20 includes your ticket and a copy of Greetings From on vinyl). The night also features performances by Twin Within, The Crowleys, and local music lovers acting as DJs throughout the night. Buy tickets here. You can also catch The Dill this Saturday, August 18th as part of the Riverfest lineup in Elora.

Quotes are taken from my conversation with The Dill on 93.3 CFMU. Thanks to Dylan for sending me a copy of 52.