Hamilton, meet COBRA! In their own words:

COBRA is a Hamilton-based collective of artists of colour. It has come to our attention that artists of colour are under-represented, both at the grassroots and administrative levels; we seek to offer our perspective as the Hamilton Arts Community begins making strides towards a more complete understanding of the city’s under-served artistic scenes.

Observing a lack in opportunity for non-white artists, the idea for COBRA took shape in 2016 as artists from diverse racial backgrounds – photographers, musicians, playwrights, visual artists, designers – began discussing the challenges they collectively experienced as a racialized community. These artists have all contributed in major ways to Hamilton’s artistic scenes and are considerable components in the growth and popularity of Hamilton’s art and culture (which is now a selling point in drawing people to the city).

Designer and visual artist Stylo Starr has been creating with a variety of mediums in the Hamilton scene for nearly eight years, and exhibited her work “89 Dames” at the Art Gallery of Hamilton in 2017, her first major solo show at a venue like AGH. Through participating in Hamilton’s art scene, she connected with other racialized artists. “COBRA came about from a bunch of us just talking about a little bit of the hardships that we go through in the city, getting exposure, gaining the visibility that we need,” says Stylo.

The conversation began with Stylo, musicians Kojo Damptey, Shanika Maria, and Nasr Beny, photographer George Qua-Enoo, Kobi Annobil of Canadian Winter, and Nea Reid. Stylo says, “We all came together and basically said let’s establish some kind of coalition.” A coalition that can support one-another and provide a space for people who are also looking to be supported, and harnessing that energy to try to lift each other up.

Nea Reid started off as a visual artist and moved into performance art. She is the Artistic Director of Hamilton Youth Poets and the annual spoken-word festival Louder Than A Bomb Canada. “Even within HYP, there’s the idea of changing the boundaries for young artists,” says Nea. HYP empowers youth, gives them the space and the voice to tell their stories, and have those stories be valued. The kind of stories that are often not given space to be heard or weight to be valued. While advocating for the rights of young artists, she saw the importance to do the same for herself and her peers.

As we celebrate Hamilton’s rising artistic scenes, it’s vital to bring attention to and elevate marginalized voices, ensuring a well-rounded representation of our arts scene. It’s crucial to have a diverse range of voices and talents so that everyone may see themselves represented.

“It’s time to longer be complacent,” adds Stylo. “It’s not an easy road to traverse, but it needs to be, and I’m really happy and proud to be a part of it.”

COBRA kicks off with a launch event this Friday, February 9th at the AGH Annex (118 James Street North). It will be the final Art Crawl event in this space before it closes for good. The night runs from 6 p.m. – 10 p.m. featuring live music, theatrical performances, vendors, and art installations which are all representative of Black and Racialized communities in Hamilton. The purpose of the launch is to be accessible for everyone and to further invite dialogue and collaboration. The entrance fee is pay-what-you-can with donations accepted. 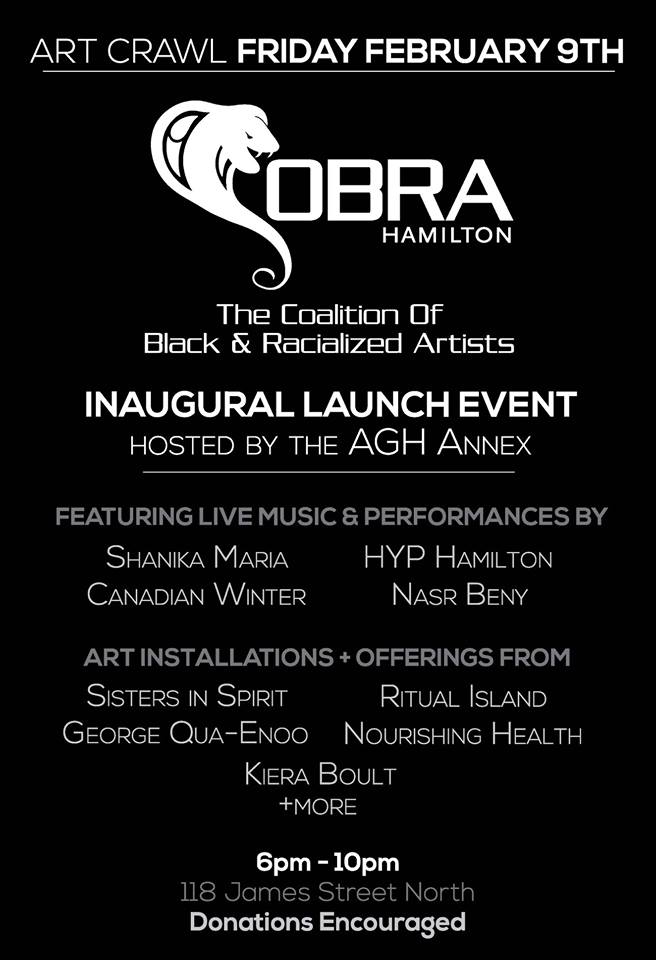 Quotes are taken from my conversation with Stylo Starr and Nea Reid on 93.3 CFMU.