Dwarfed by its neighbours, the Canadian Football Hall of Fame building has never had much time in the spotlight when it comes to our modern architectural history.

It’s easy to forget a relatively small slab of steel, stone, and glass when its overshadowed by Roscoe’s serene City Hall, Garwood-Jones’ bruting gothic forms of Hamilton Place, Peene’s regal Carnegie Library, and even to an extent, Whitehern and its sunken garden.

There is quite the history to the building. A history that is, in many ways, quintessential Hamilton. Councillors dithering, politicking. A public not convinced. Years and years of delays. Battles with Toronto. The whole ordeal was almost another chapter in Unbuilt Hamilton. But before getting into politics, let us look at it from an architectural stand-point, with eyes not yet tainted by a decade of debacle. 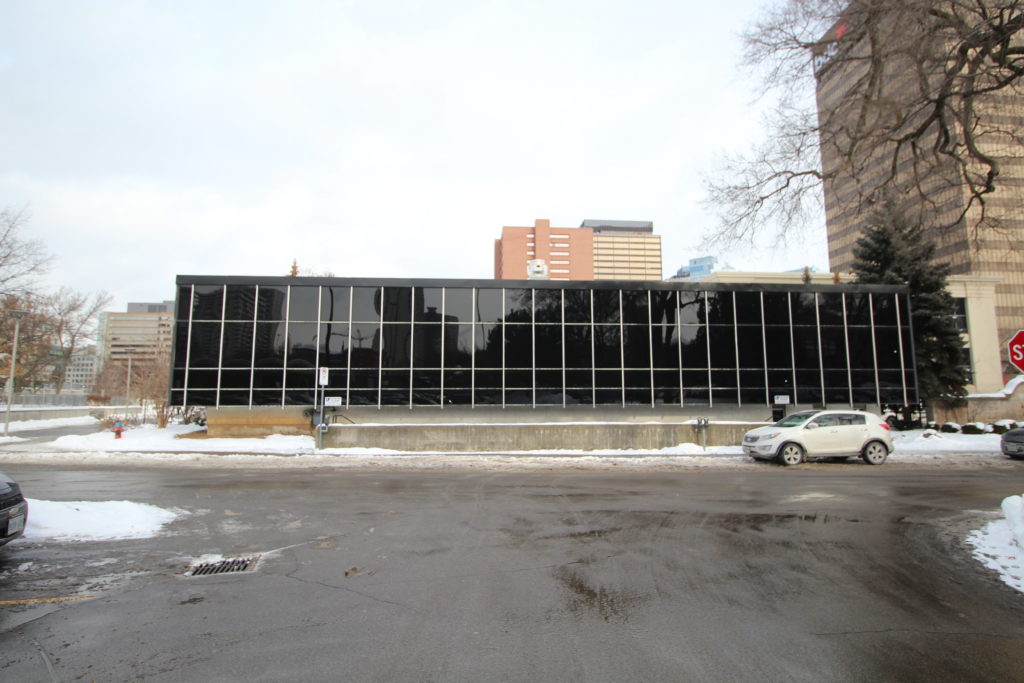 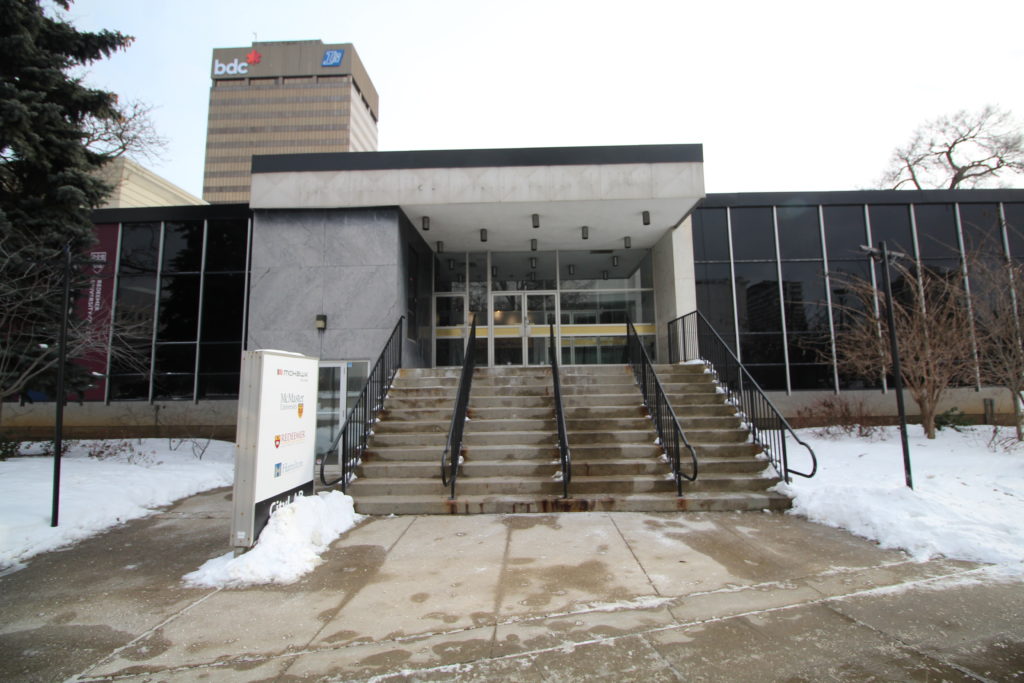 Designed by Munro-Ploen & Associates and completed in 1972, the building takes its cues directly from the Bauhaus tradition. A Miesian composition of less is more, ubiquitous in form, rich in material, and off-putting in its blacked out curtain wall. Its essentially a horizontal black monolith cantilevering over a marble clad plinth, but a handsome building none-the-less. Even if it is nothing more than orthodox.

It’s not the only building in the city Munro-Ploen have designed. Their most prominent commission soars 427 feet in the sky. That’s right: our tallest, arguably ugliest building, Century 21 is their other claim to architectural fame in Hamilton. It could have been cooler though. It almost had a helipad.

And the CFHOF could have been cooler too. The building went through several iterations. Each more watered down than the last for the obvious reason of a shoe-string budget.

A timeline of political fumbles

Let us now look at the timeline of the birth of the Hall of Fame, starting in 1962. Ten years before its completion.

It all begins with the Hall of Fame being award to Hamilton, based solely on the fact it was the only city to meet the bidding deadline. Mayor Lloyd D. Jackson submitted the bid and wasted no time in coming up with a render, which of the three, was the most stylistic.

For the time being the preliminary location was close to Ivor Wynne Stadium, in a building adjacent to the Jimmy Thompson Pool rented by the Hall of Fame for just $1/year, but the land was sold soon after and would eventually be the site for what was Scott Park Secondary. For a brief moment the idea of having the Hall of Fame inside the school was considered.

Because of this early setback, the Hall of Fame board started demanding compensation from the school board in 1963. It’s now two years in (1964) and nothing has materialized, so new mayor Victor K. Copps has to ensure the CFL that Hamilton still wants the HoF and it has full public support. Still looking for sites, the Hamilton Harbour Commission offers a site on Bay Street next to the Leander Boat Club. No deal. With nothing happening, council votes on a deal championed by Copps to raise an additional 50,000 if the HoF matches the funds.

It’s almost 1965 and there is no site and no sign of progress. The CNE expresses interest. Toronto is now game. Councillor Piccininni votes to intervene with a bid. Hamilton’s chances are waning. Copps senses he might lose the bid and be humiliated publicly, so he appeals to council and the public for reinforced support. He gets the Hamilton Spectator to post a vote for the public and the results are quite low: 3478 say Yes and 1114 say No.

Does this not sound like a broken record when it comes to our council?

It takes 3 years to finally find a site, with the Rock Garden, Dundurn Park, and Confederation Park all being considered. Copps and the board finally settle on Murray V. Jones’ Civic Square vision. Council doesn’t like it, exclaiming the land is too valuable. Alderman James Bethune says “Champagne tastes and a beer budget.”

After two years of searching they also found their design team in 1967 and Murray Jones, the Planning Architect and Consultant, chooses the land adjacent to City Hall. It finally looked like it was all coming together.

It’s 1969 and Hamilton is now in the midst of a construction worker’s strike, which ends up lasting half the year. After 8 years the ground is finally broken in 1970. Toronto Councillor Piccininni is sent a bucket of dirt.

Costs escalate and so the design becomes more and more muted, with a basement addition foregone as well as the exclusion of a complete marble clad exterior meant to mimic the exterior of City Hall. They settle with what it is today.

On November 28, 1972 the Hall of Fame finally opens with Victor Copps kicking a football through portable goal posts in what was aptly named “Vic’s Kick”.

After shutting its doors for good two years ago due to (amongst other things) poor attendance, the Hall of Fame is looking for a new home. It’s rumoured that it will be relocated to Tim Hortons Field, but nothing is set in stone. We may just yet see another debacle unwind.

As for the current building? The City of Hamilton has launched CityLab, an innovation hub for experiential learning, in partnership with McMaster University, Mohawk College, and Redeemer University. 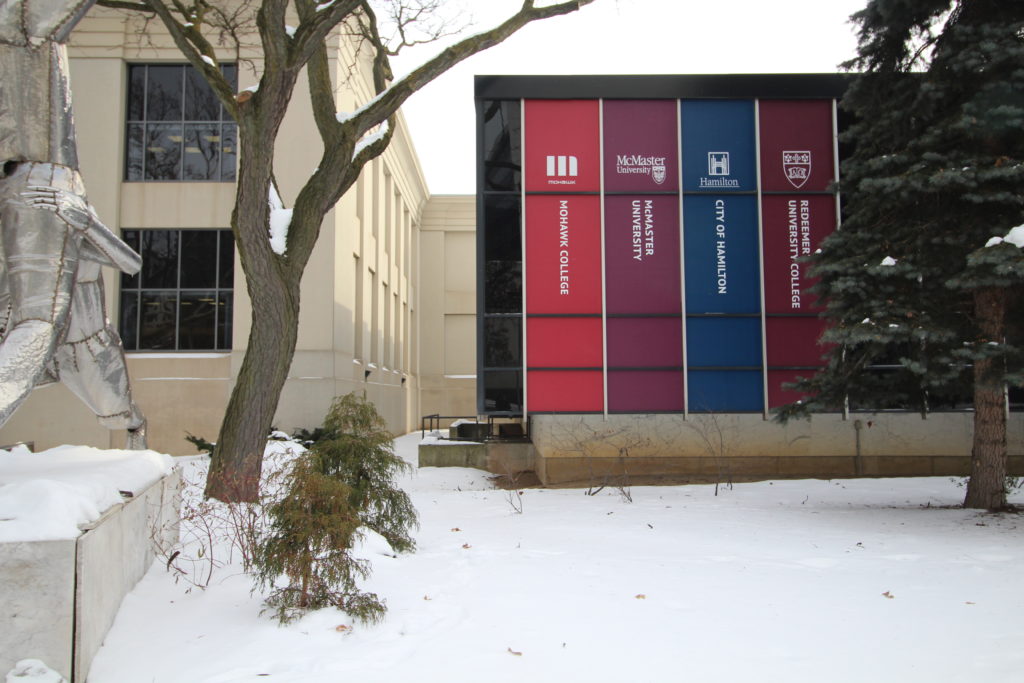 The building has seen updates and renovations to meet current building standards and new programming making it fully accessible and open in concept.

It’s nice to see architecture repurposed. As it should be. Touchdown, Hamilton.