When we first started brainstorming The Inlet and what it might become, one of the first things the team collectively decided was that we wanted to explore and celebrate Hamilton’s hidden gems. Almost immediately, visions of Bonanza Bakery sandwiches began swirling in my head.

Tucked at the intersection of Catharine Street North and Murray Street East, Bonanza Bakery dominates the corner of a mostly residential street in a building that was once a house. A treasure hidden in plain sight in Hamilton’s North end, Bonanza has been serving up fresh bread, submarine sandwiches, and hot food for decades. It’s a favourite among employees at the Barton Street Jail, City workers, and hospital employees — to name only a few. It also has a champion in Max Kerman of Arkells who gave the bakery a shoutout during a 2015 acceptance speech at the Hamilton Music Awards and again in an article he wrote for Exclaim.

At first glance, Bonanza Bakery isn’t much to look at. The paint is peeling from the red-brick exterior and the signage seems to come from an era long gone. However, what Bonanza lacks in aesthetics, it compensates with taste. And on any given work day, just around lunch, people spill out of the bakery’s door, lining up for cold-cut sandwiches, pizza, and pastries. 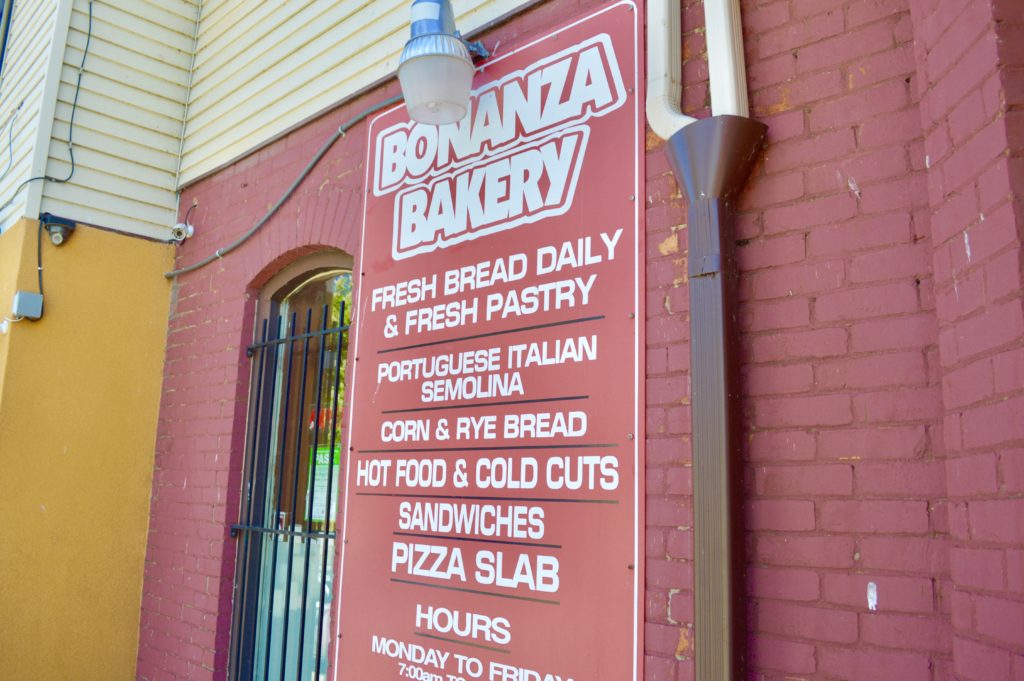 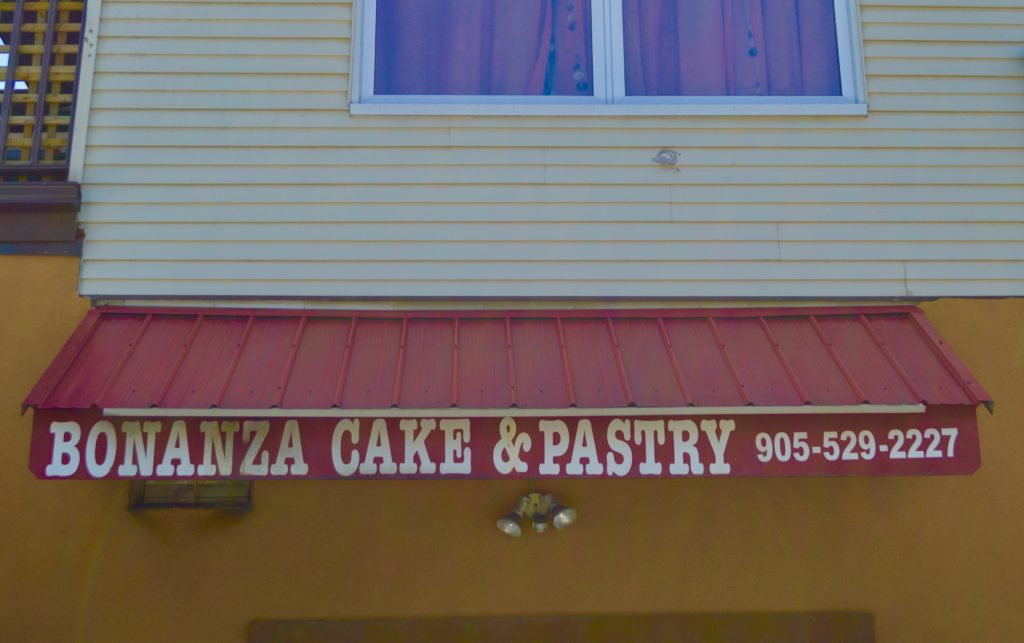 Cheap Eats
Bonanza is cash-only, but you likely won’t need to make a trip to the bank machine. Most menu items can be bought with little more than pocket change. When it comes to Bonanza’s beloved deli sandwiches made on freshly baked bread, only the prosciutto and turkey bacon club cost $5 or more. The rest, including capicola, salami, mortadella, black forest ham, and Montreal smoked meat cost $4.50 or less. Even vegetarians will love the meat-heavy Bonanza Bakery. The veggie sub is best when you splurge for a cheese upgrade of Swiss, provolone, havarti, Jalapeno havarti or Mozzarella. Trust me: It’s worth the extra $1.25.

A 2012 Hamilton Spectator article claimed that Bonanza Bakery was then serving 500 sandwiches per day, a number that I expect has climbed. However, there are many other meals to try, including slab pizza, pasta, and seafood dishes. And don’t even think about leaving Bonanza without dessert. Handmade Portuguese tarts and cakes are also a large draw. Before you pay for your meal, take a peek at Bonanza’s fresh bread counter located directly behind the cash. 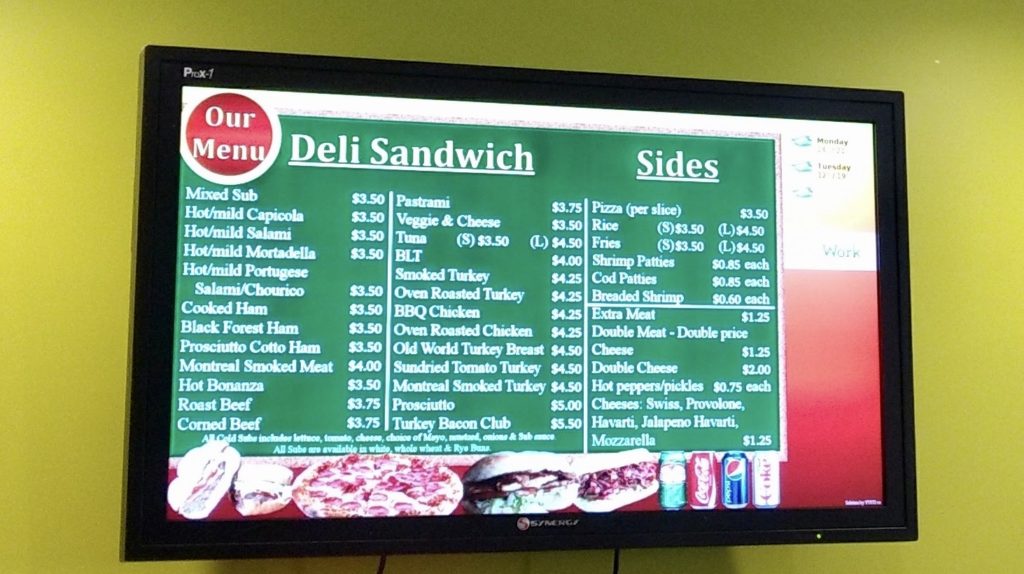 Picnic Perfect
While Bonanza doesn’t offer any seating, on a sunny day, stay in the neighbourhood for a picnic. Just steps away from the bakery is the Mary Street Pedestrian Bridge and the Cancord site of the Hamilton Victory Gardens. The Hamilton Victory Gardens is a not-for-profit team of community volunteers dedicated to alleviating hunger and food insecurity using urban agriculture. The Cancord site was established in 2012 and has 196 raised garden beds, growing dozens of types of vegetables and fruit to be donated to local food banks and meal programs. With a number of shaded picnic tables and a lot of green space, it’s the perfect place for a picnic lunch. 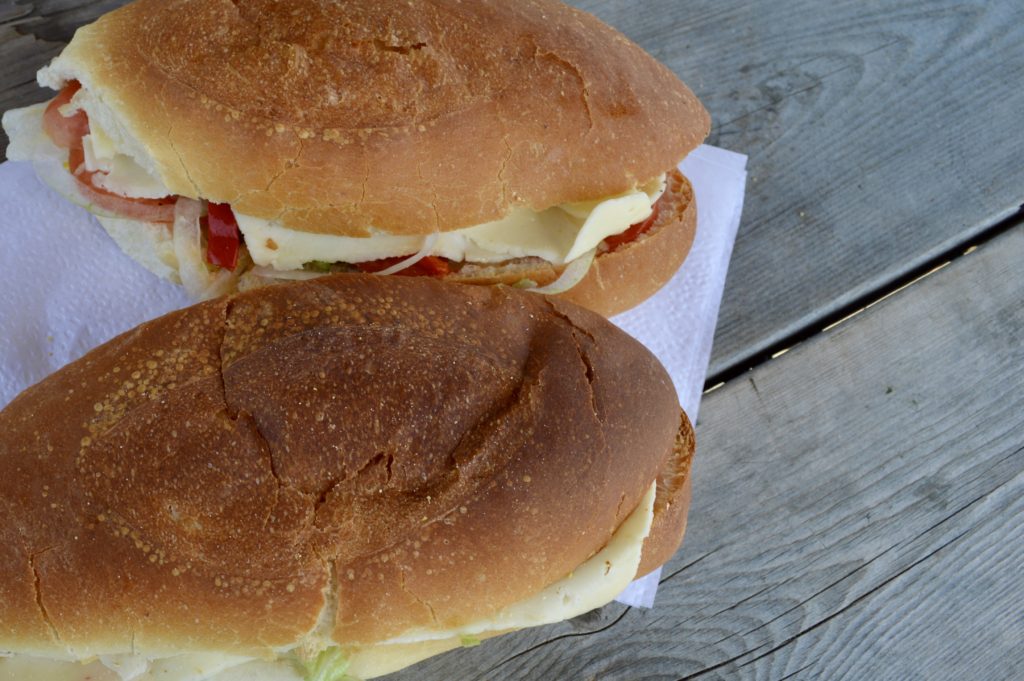 Bonanza Bakery is perfect for fans of inexpensive, unpretentious meals, but if you’re hungry for dinner, get there early. Bonanza is open until 5:30 p.m. on weekdays, but only until 4:00 p.m. on Saturdays. Perfect for early risers, it opens at 7:00 a.m. every day except Sundays.