Sometimes the simplest structures can have a huge impact, both culturally and visually. One such structure was the Market Square Car Park. The car park lasted all but a few decades, yet it still lives on in a finite amount of photographs.

Designed by architects McIntosh & Moeller and opened on Halloween day in 1960, the midcentury car park connected to the old Eaton’s and was the location of the open air Hamilton Farmers Market. Teal corrugated steel, a coat of arms, and modern typeface graced the car parks concrete facade. It had style.

More than just a place for cars, it was also a smart piece of urban design. At street level the car park harmonized with pedestrians and the market. A pie crust shaped canopy extended beyond the structure to act as shelter for the market vendors, their trucks, and patrons. Concrete parasols equipped with pot lights aptly dubbed “mushrooms”, dotted the landscape and provided shade for various stalls amongst the public space. It was a vibrant, bustling place to shop. 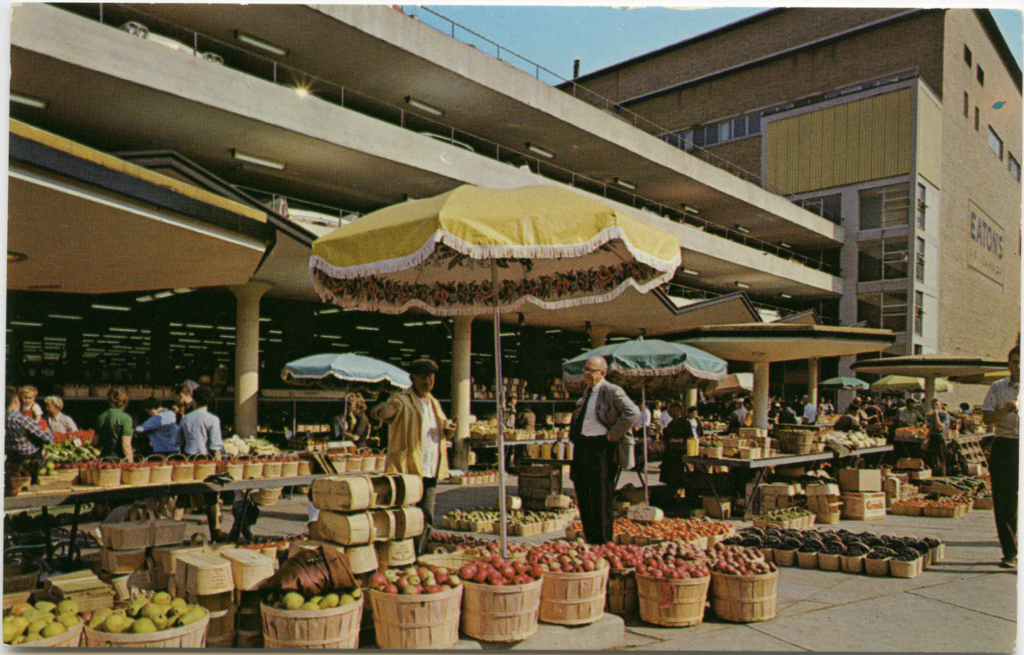 In 1978 Eaton’s bought the parkade from the city with an agreement to extend their existing store on James Street. The car park was eventually demolished in 1987. The new Eaton’s opened in May of 1989 on the site of the former Market Square and the old Eaton’s was then razed to make room for The Eaton’s Centre. A year later the complex opened and Eaton’s was joined to the mall.

As for the Farmers Market, it moved across the street beside the Hamilton Public Library soon after Eaton’s purchased the car park. And the rest is history.

Started in 1837, the Hamilton Farmers Market has been around longer than Hamilton itself and has gone through many iterations and locations. From open air to indoors. However, out of all its long and rich history the midcentury Market Square car park seems to have been forgotten. And thats a shame.

Feature photo courtesy of On The Market

**Special thanks to Vintage Hamilton for providing additional research