Settled amid cozy cottages and heritage homes in a historic district of Dundas is the Witherspoon House. Designed by Carrothers and Associates, there is a lot more to this quaint contemporary house than what meets the eye.

At first the idea of living in the house was a “total fluke” according to Tanja Grmusa, a realtor by profession but a designer by choice, who started Five Design to focus on her passion. She and her husband Johnny have taken to flipping houses at a rate of about one per year, but for some reason this project was different. It wasn’t just another flip. It was a place for them to settle down with their three children.

“We came across the lot and loved the size of it and we loved the neighbourhood. There were over 17 bids on the property, so we lucked out,” says Grmusa. “The older house couldn’t have been saved. It was beyond repair.” So they tore down the existing house and built a new 3100 square foot home with their family in mind.

Managing the build as the general contractor, Grmusa reached out to David Carrothers to come up with a design that wouldn’t be overpowering on such a quiet street. “We didn’t want to be ‘those people’ from Burlington” said Grumsa, alluding to the spread of monstrous McMansions throughout Burlington. 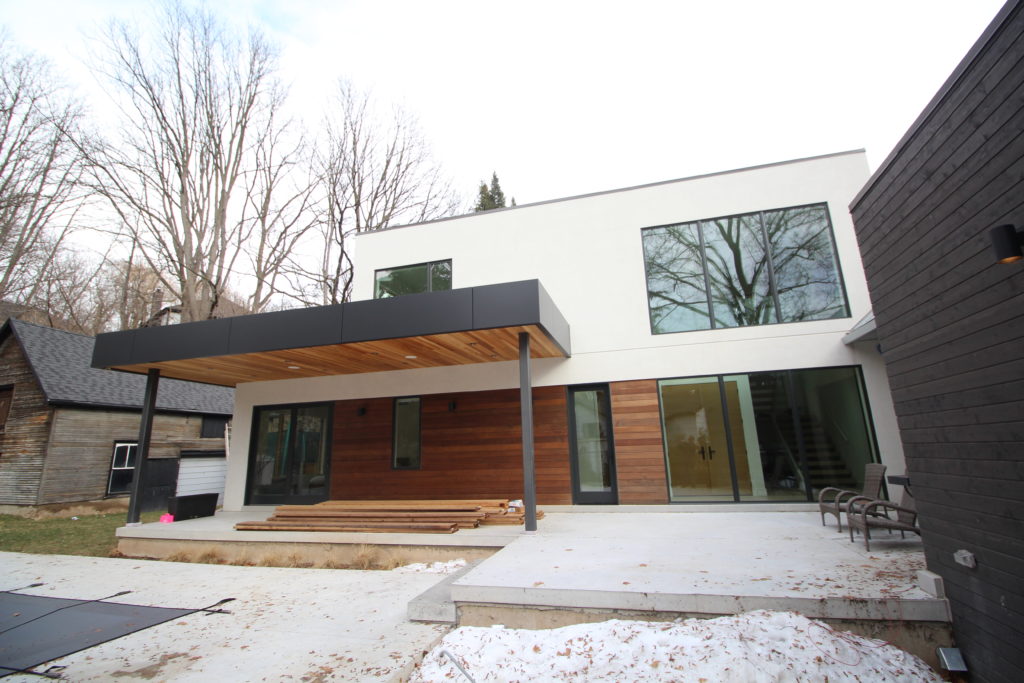 What they wanted was a house that would fit seamlessly with the existing fabric of the street lined with mature trees, turn-of-the-century and post-war homes. They wanted a modern house with “old world charm” and looked immediately at its surroundings for context and clarity in the design. “We went with that Dundas look but with a modern twist,” says Carrothers, deciding on a house of two distinctive shapes.

From the street it looks like a modest cottage. A pitched roof line with a wood and limestone rubble facade, a sizeable concrete porch with natural clear run cedar soffiting, and an attached garage is all that is really visible. However, behind the one-storey cottage is a two-storey volumetric rectangle hidden from view and connected in an L-shape composition.

The interior is spacious, bright, warm, minimal, and is divided into two parts: the social spaces at the front and the more private rooms at the back. Though divided the interior space is still very much open with clear site lines throughout the house, which is exactly what Tanja wanted. “I wanted to be able to call my kids and not have to go searching through the house when I need them.”

Common areas at the front include a mudroom, foyer, dining room, family room, and kitchen. The soft white walls and warm wood textures contrast well and give a very Scandinavian feel to the house, especially the pine framing around the windows and the rustic, durable kerfed white oak flooring. “I just love the picture window” says Grmusa, alluding to the view of the street from the dining room.

The kitchen is anything but orthodox and that’s exactly what they wanted. “I wanted simple. I didn’t want it to look like a typical kitchen,” says Grmusa. With the pantry and fridge hidden behind a storage unit and the hood vent floating over the stove camouflaged in white, she got her wish. There’s no overhead cabinets, everything needed is kept out of view with plenty of storage under the counter and island. 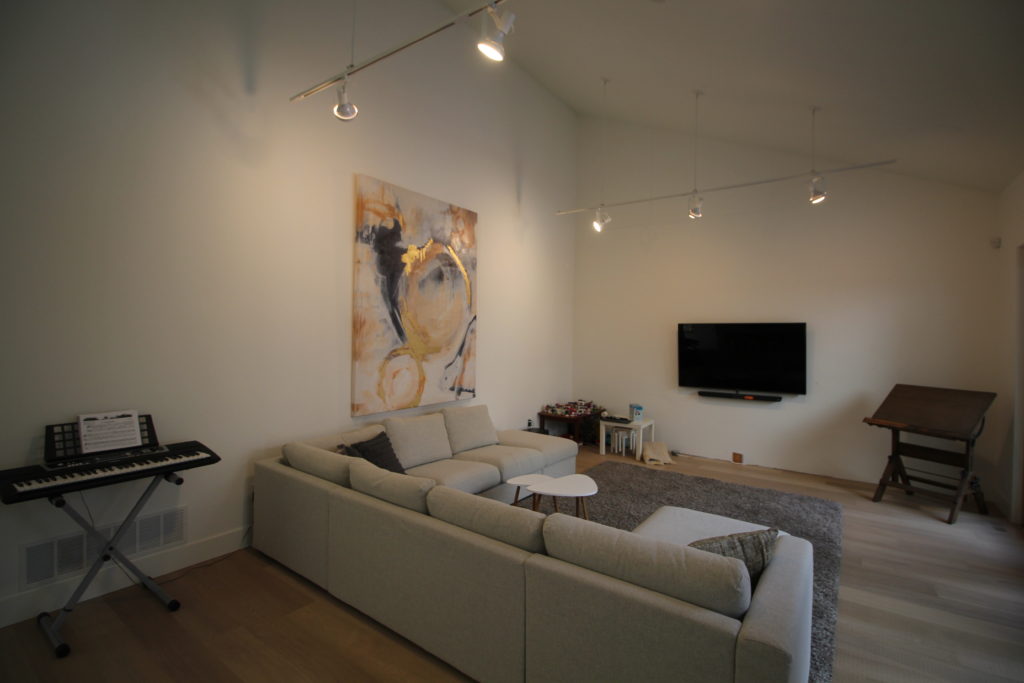 In the family room the ceiling peaks and track lighting hangs down like a bar graph. “There’s only 10 pot lights in the whole house” says Grmusa, boasting about the natural light. Views of the escarpment are to the north and the openness gives the whole space a cohesive feel. 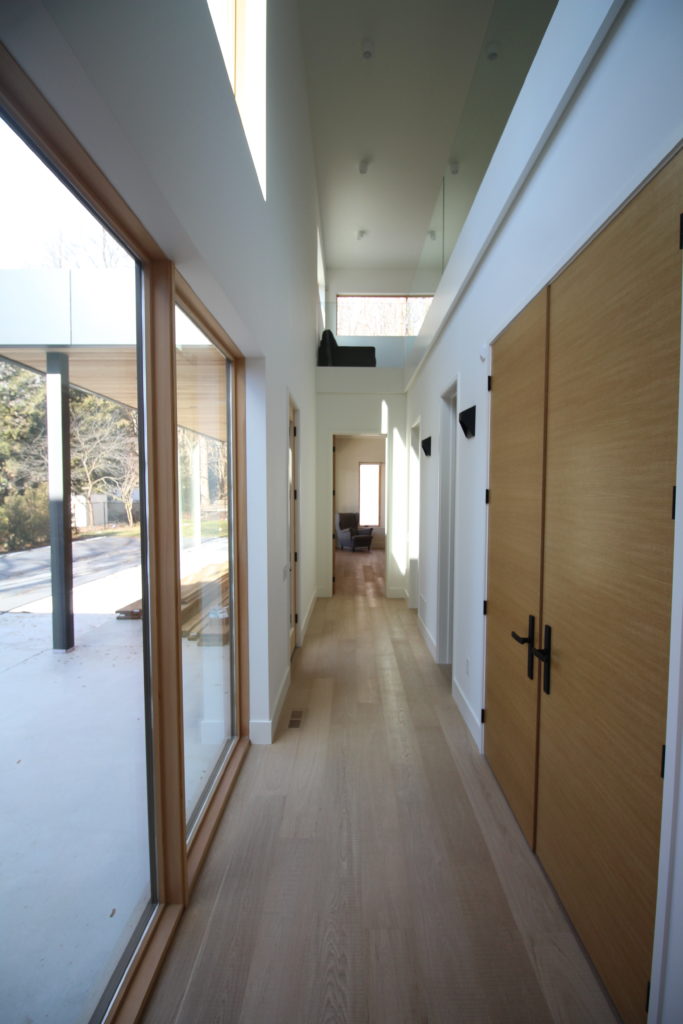 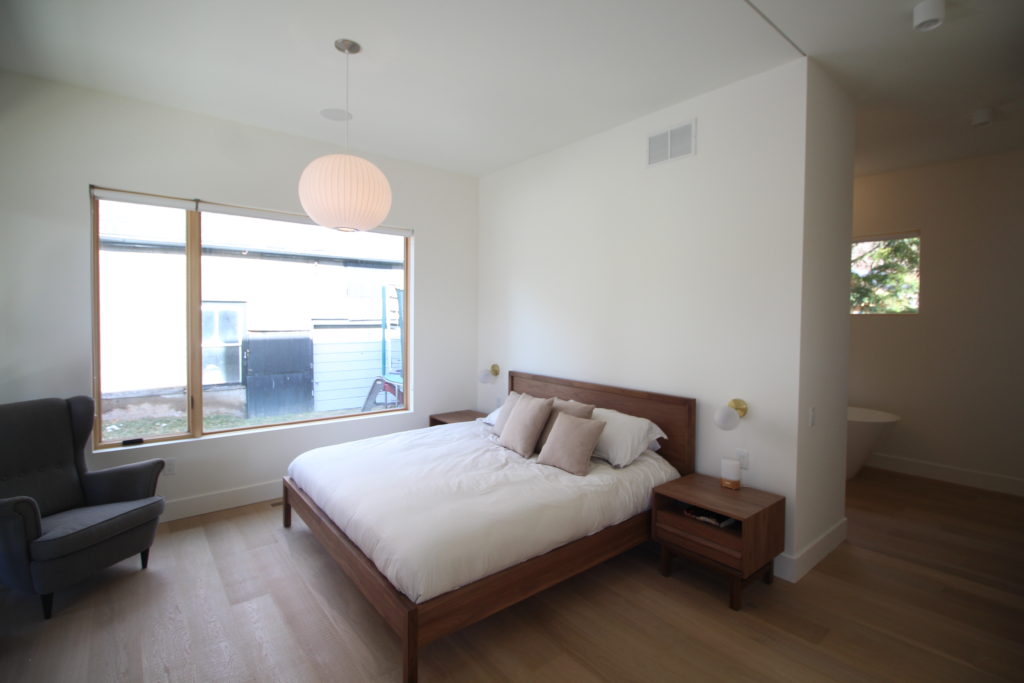 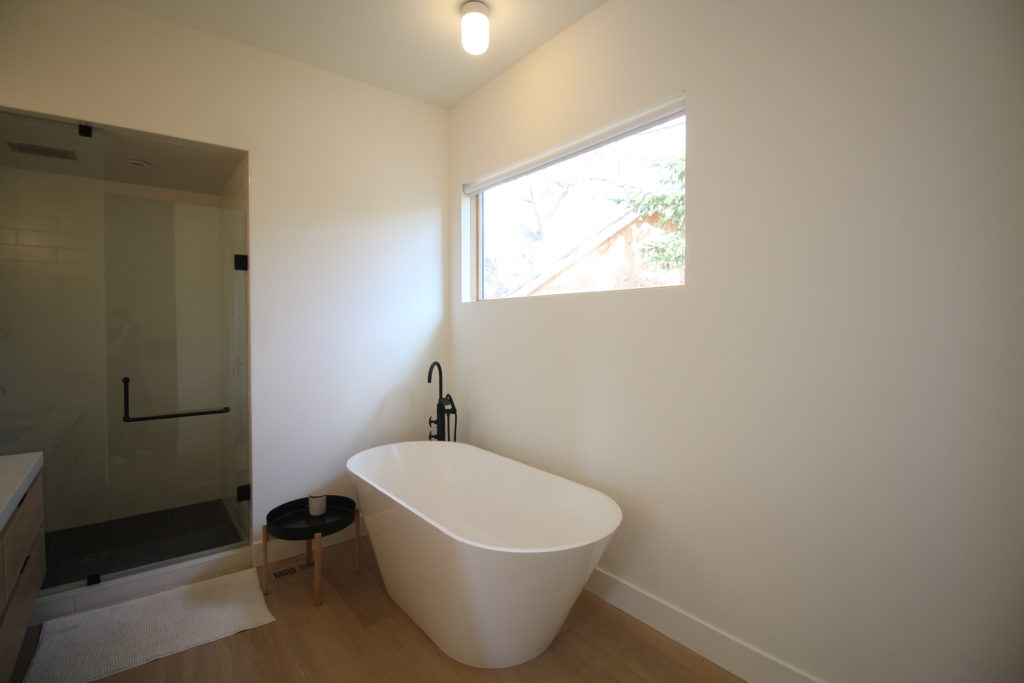 Just a few steps beyond is a hallway that leads to the bedrooms. The spacious master bedroom sits at the end of the main floor, with an ensuite complete with a soaker tub.  The privacy of their bedroom and the scene outside their window gives the feeling of being in the country, not a small town street. 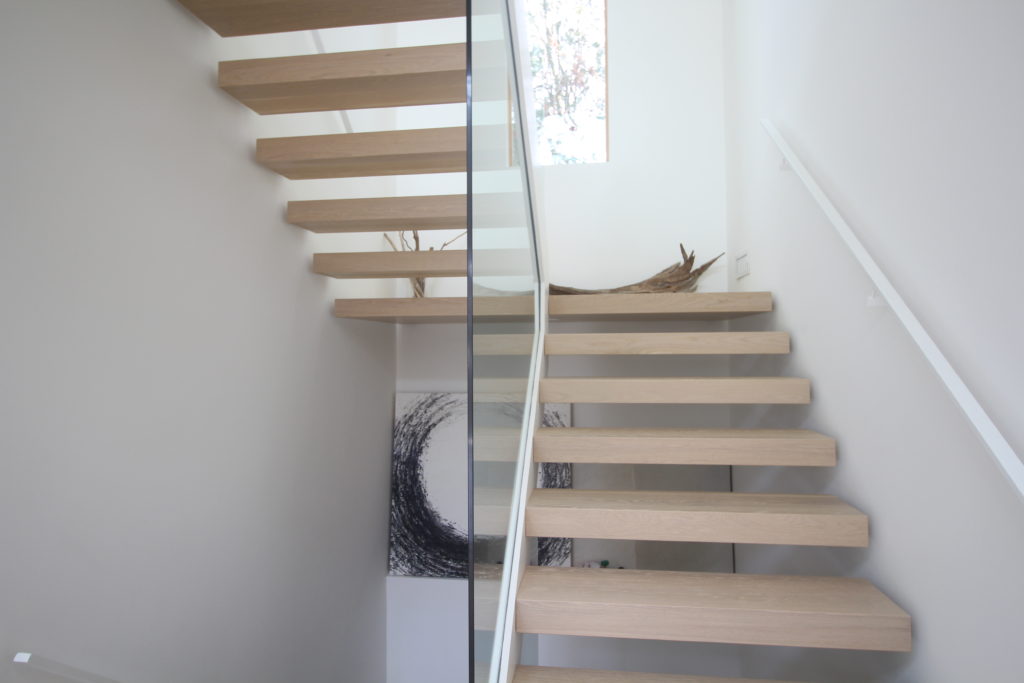 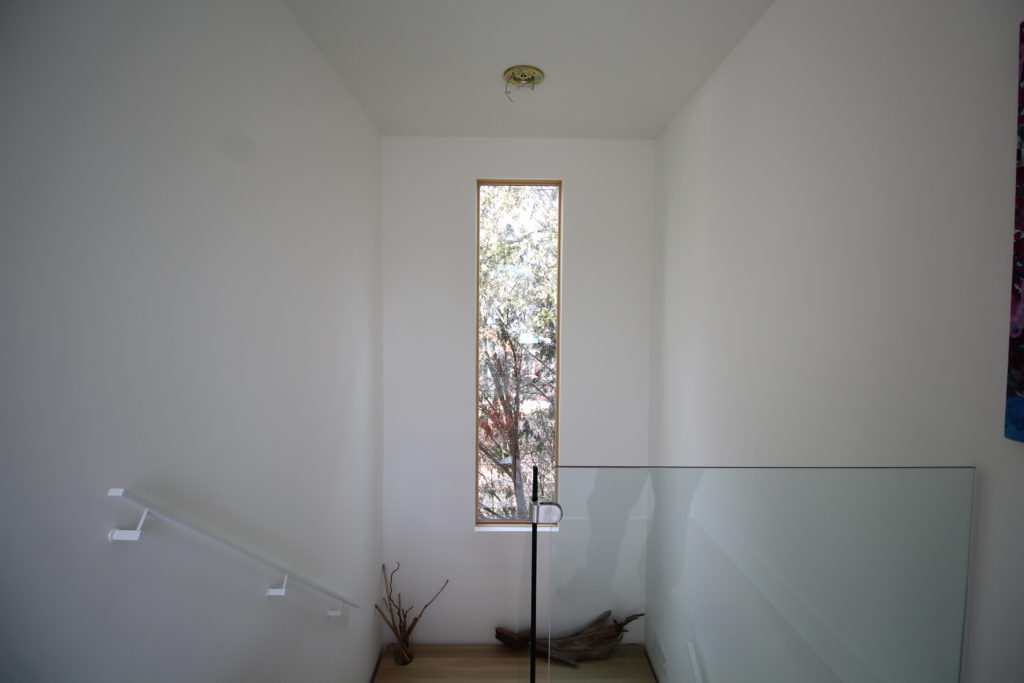 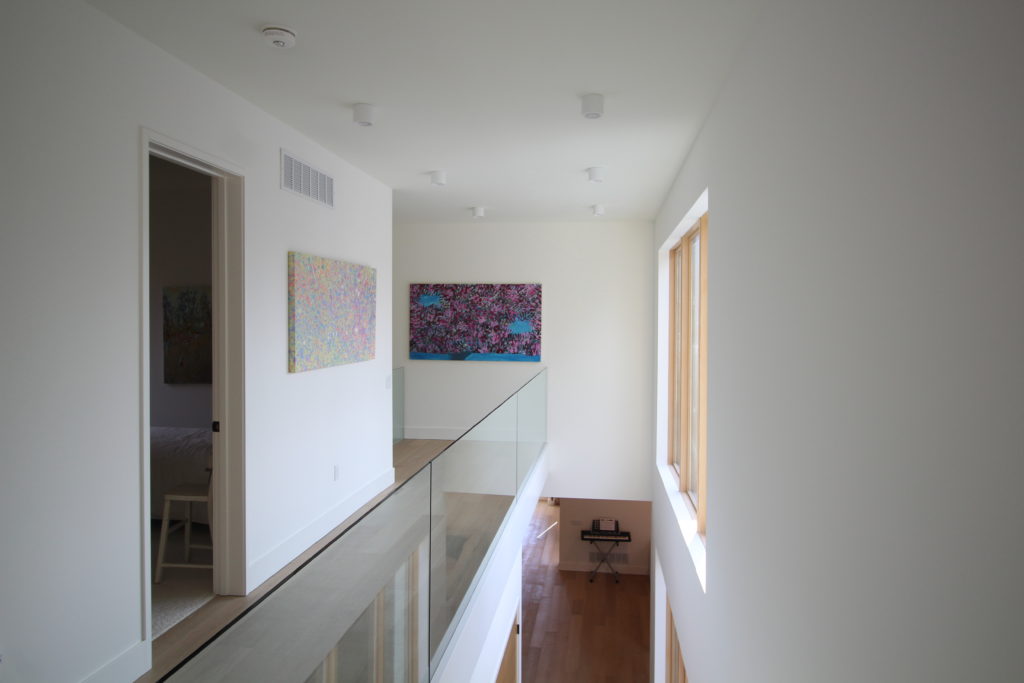 One of the most distinctive design elements in the house is the floating staircase. Something Carrothers has mastered. Riser-less, minimal, the steps look weightless. The white handrail blends in with the wall and the glass panelling makes the ascent or descent a satisfying experience. Upstairs there are bedrooms, a crafts room, and a bathroom down a single-load corridor. All of this overlooks the hallway below and allows for more light and transparency.

“I think people are finally starting to value design,” says Carrothers. The Witherspoon House is not only a lesson in good design, but also an example of how a new build can add contemporary charm to a traditional neighbourhood in a sympathetic way.