May You Always See The Light

May You Always See the Light  – a new art exhibition by local artist Nathan Eugene Carson – “encourages the viewer to scratch away at the surface, to see more than the immediate, to appreciate the layers of personal history that constitute a place and a person’s experience of it.” The exhibit opens during Art Crawl – this Friday, August 11th at Oswald’s Gallery (328 James Street North).

If you’ve met Nathan, you know that light shines through in everything he does. Nathan was born and raised in Hamilton and lived and studied in Toronto at the Ontario College of Art and Design before returning to his hometown about three years ago.

“I’m more of an isolated artist, so I just like to stay in my studio and work. It took me maybe close to two years to even venture downtown to see what was happening,” Nathan relates. Exploring the scene, which had changed so much during the time he was away, brought about so many new connections for the artist.

When delving into Hamilton’s art scene and checking out his first Art Crawl, Nathan connected with Oswald’s founder Alex Taves, who at the time was set up on the street as a vendor. “I was really attracted to his art, and I met him formally through [another local artist] Gord Bond. They were just in the very beginning stages of talking about a collective, so it was me and Gord who were the first to join.” Now eight artists make up the colourful collective of Oswald’s.

This particular gallery was a fitting match for Nathan. “They’re really free and open,” he says, adding that they were the first gallery he spoke to who let him paint the walls black. “Oswald’s was the first to say yes, and [let me] do what I want.” It’s like a collage of art at Oswald’s, with each artist actually painting over the previous wall space or hanging their work on top of the wall that’s already there. You can feel the energy of the new artist being added into the mix, and building upon the creativity that’s already in the space.

By painting the walls black, Nathan is creating a new blank canvas and the process starts all over. “Hamilton, for me, is a city full of new beginnings and clean, fresh starts,” he says. His works is described as “bombastic colour palettes and loosely rendered forms.” Nathan’s work includes “drawn and painted works on paper, populated with richly pigmented figures and animals, often presented in fields of black.”

While the show runs until September 3rd at Oswald’s, the opening reception at this coming Art Crawl on August 11th is not to be missed. “I don’t really like the word ‘show.’ It’s more of like an experience,” says Nathan, relating it to “Andy Warhol’s Silver Factory where they had The Velvet Underground playing, and other people can make art too, and it just happens that I have some art up on the wall. Other artists are part of it whether it be through printed media or buttons… I really wanted to bring everyone together for this experience.”

One of those components in this sensory experience will be audio, in the form of an improvised, live Loop Electro performance by local artist Seamus Hamilton, whom Nathan met through Oswald’s founder Taves. Seamus also recorded songs exclusively for May You Always See The Light, and a limited run of vinyl will be available at the opening. The vinyl is a piece of art in itself, with its own unique packaging. Even the sense of taste will be triggered, with snacks provided by local favourite Mezcal TNT.

New art is being created by Nathan for the exhibit right up until showtime, and even comes to light in the moments of installation. Inspiration may strike at any moment. “Life dictates to me […] Until I get actually in the space, it’s kind of still up in the air,” Nathan muses, “which is wonderful.” 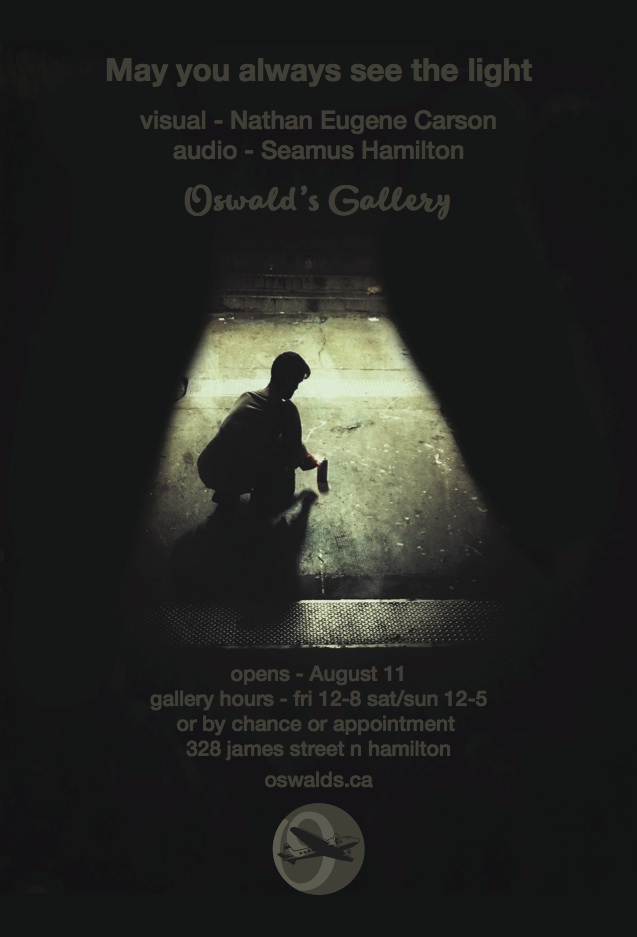 There will be a little something for everyone at the show – if you can’t take home a bigger piece of art there will be smaller items like zines, buttons, and more.

Quotes from Nathan Eugene Carson were taken from our interview on 93.3 CFMU.