With Hamilton’s art, food, and music scenes garnering more and more attention, there’s another incredible art form that’s right there under the radar.

Hamilton Youth Poets (HYP) was founded in 2012 to create a space for youth to hone their creative skills and give a platform for their voices to be heard. Through spoken word, poetry, and hip hop, HYP offers monthly poetry slams as well as writing, emceeing, and beat-making workshops to empower youth.

On every 4th Sunday of the month, Hamilton Youth Poets take us to church. The Spice Factory is home to their monthly open mic slams – the space is full of youth ready to perform or be a spectator and supporter of the powerful performances.

A brief rundown of how it works – poets are given 3:10 minutes to perform. (If they go overtime, the timekeeper lets us know and we all recite in unison, “Damn you linear time, you’re ruining it for everyone but it was well worth it!”) No musical accompaniment, no props, no hate speech, and only original material. Judges are randomly selected from the audience and receive a whiteboard to write down a score on a scale from 0.0 to 10.

To begin, a sacrificial poet performs for judges to score in order to set a benchmark for the upcoming slammers. If a poet gets a 7.6 and you disagree? Shout “Higher!!” The audience gets vocal, and that’s part of the fun. When a poet says something that speaks to your soul, you snap your fingers, give a “Mmmm,” right from your gut, or stomp your feet. 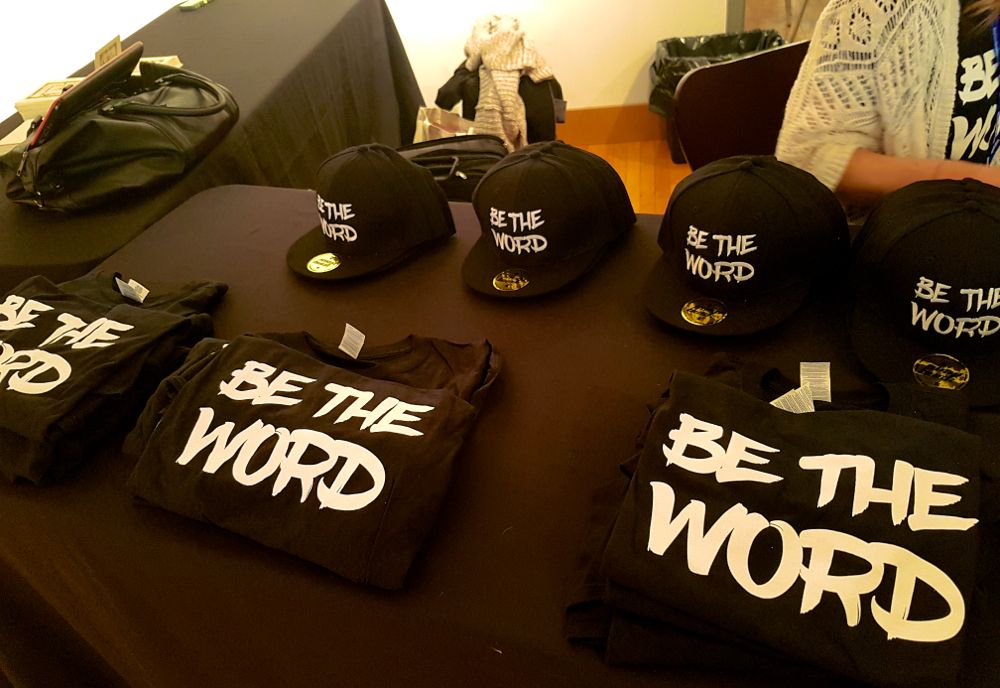 The performances reinforce the power of human experience. When you find yourself connecting to a 17-year-old’s heartbreak you realize how we’re all the same. Their work instills compassion – these young artists leave their hearts on the stage. To hear a young girl speak about overcoming feelings of unworthiness and not having to compromise herself for a boy; to hear a transgender youth speak with such conviction about being who they truly are despite facing daily adversities and judgement. To hear the pain of some of these experiences, it’s inconceivable to me to even go though it let alone find the artistry and articulation that they have to express it, and the bravery to perform it.

This past week marked HYP’s annual hip hop poetry festival Louder Than A Bomb, the largest youth poetry festival in Canada. Competing schools come together to duke it out with their words; although, as they always say, “The point is not the points, the point is the poetry.” The festival is about celebrating each other’s stories and creating a supportive platform for youth to be heard.

The preliminary bouts for Louder Than A Bomb were on par with sporting events. The energy in the room at AGH Annex was electric as youth rallied and cheered each other on. It’s a competition, but the respect they have for each other’s work is apparent. A highlight was the group round – carefully crafted pieces that worked around a central theme, at times performing in unison, in perfect sync. As a judge on the third day of the fest, I was moved to score a group from Waterdown High School a perfect 10.

More events during LTABC included the Emcee Olympics, Coaches Slam, Queeriosity, and the Underground Indies. It was also a joy to be introduced to the work of Canadian slam poetry champion Andre Prefontaine, a dynamic performer who hosted several of the events. Andre will be representing Canada at the World Cup Poetry Slam later this month in Paris, France.

Witness the exciting conclusion to this year’s festival as the Louder Than A Bomb 2017 Finals take place this Saturday, May 20th at Theatre Aquarius. (Get tickets)

Thank you HYP for the media pass to attend LTABC 2017.