With nods to the town’s agricultural roots, the recently opened Binbrook Public Library, designed by Invizij Architects, adds architectural flair to one of Hamilton’s booming suburbs.

The original Binbrook branch opened in 1966 and 1982 a new library was built after receiving a grant from the Wintario Lottery, but much has changed since. Especially as of late. Between 2011 and 2016 the population of Binbrook nearly doubled from 4,926 to 8,794. It became clear a larger modern facility was needed for the growing community.

Located right on Regional Road 56 in downtown Binbrook, the 6,000 square foot library is composed of three volumes: two parallel, soaring volumes with peaked rooflines and black brick facades intersected by a squat volume jutting out at both ends. Double the size of the previous branch, the design of the building gives off a Scandinavian impression. Minimal, stylish, and rooted in subtle symbolism. Staggered black barns fragmented, yet connected. Past and present.

Inside, soaring white ceilings with V-shaped bands of LED lighting illuminate the space like slits of an exposed barn roof. It’s open, spacious, and full of natural light. The two volumes connecting between a dropped ceiling. This variation of height and scale give the space a more intimate, dramatic feel. 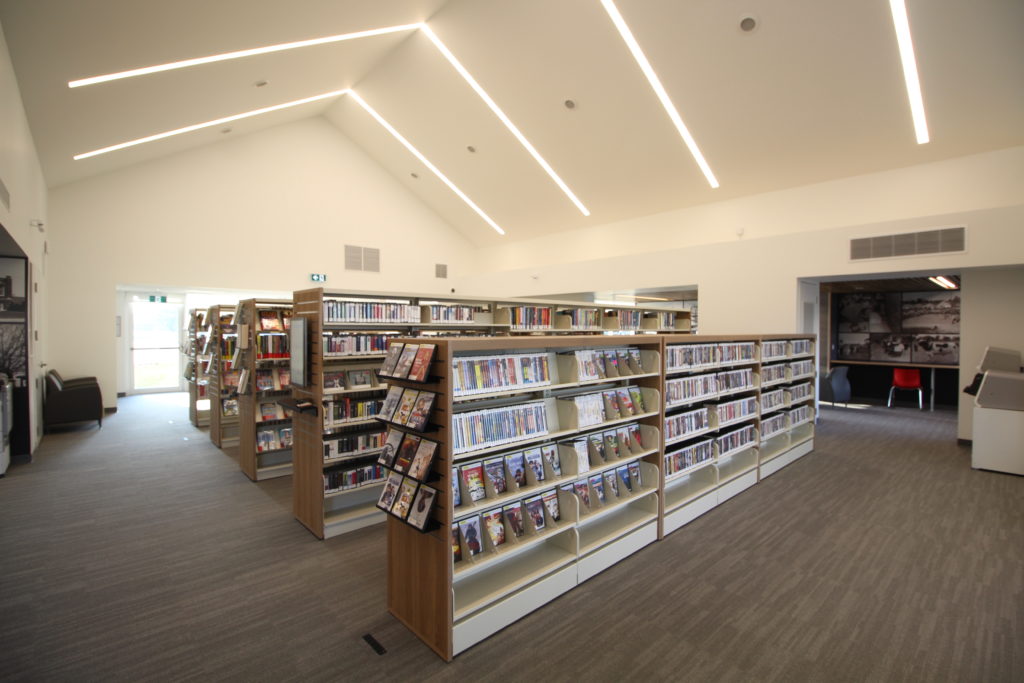 Barrier free, the interior is equipped with hidden elements to help with future flexibility when it comes to programming. Of course there’s the open layout, but there is also access floors for changes when it comes to power, and the shelving is on casters for easy movement if there are large events.

Complete with a children’s section, book stacks, archives, quiet study space, a makers space, as well as laptop and tablet rentals, the branch is definitely modern. There’s even a “living room” equipped with a fireplace and laptop bar for lounging. A unique feature is the dedicated programming room on the North East end of the building, perfect for tutoring lessons, studying, and community meetings.

Though slightly set back from the street, it’s doesn’t feel disconnected from its surroundings thanks in large part to a small courtyard complete with a garden and seating (with free WiFi connectivity even after hours). To encourage walkability in a car-oriented town, a pedestrian crosswalk was also added.

Since opening, the Binbrook Library has seen an huge uptick in visitors and new card signups.The branch’s hours have also expanded from 35 to 51 with Friday now an open day. It’s amazing what progressive design can do to encourage learning and connect a community.

For directions and more visit: http://www.hpl.ca/branches/binbrook-branch