HPO Executive Director Diana Weir says that Music Director Gemma New, who has been with the HPO for two years now, wanted to “design a format that gave the audience the opportunity to get close to the orchestra, to really feel the power of the music, and of the musicians, and get to know us a little bit better in a different venue that’s not your traditional concert hall experience.”

FirstOntario Studio was structured for a performance that would trigger the senses. The traditional orchestral set was shaken up to be performed in the round, with the audience seated directly in rings around the musicians. So close, in fact, it felt like we were all in an orchestra pit together. I wanted to be holding an instrument just to fit in! We were encouraged to move around any time and to choose different seats during each half of the show. In the second, I was sitting so close to the oboist I could have leaned in and tried to read the score. We couldn’t have been any more immersed in the performance; what a rare opportunity to be so fully part of the experience. 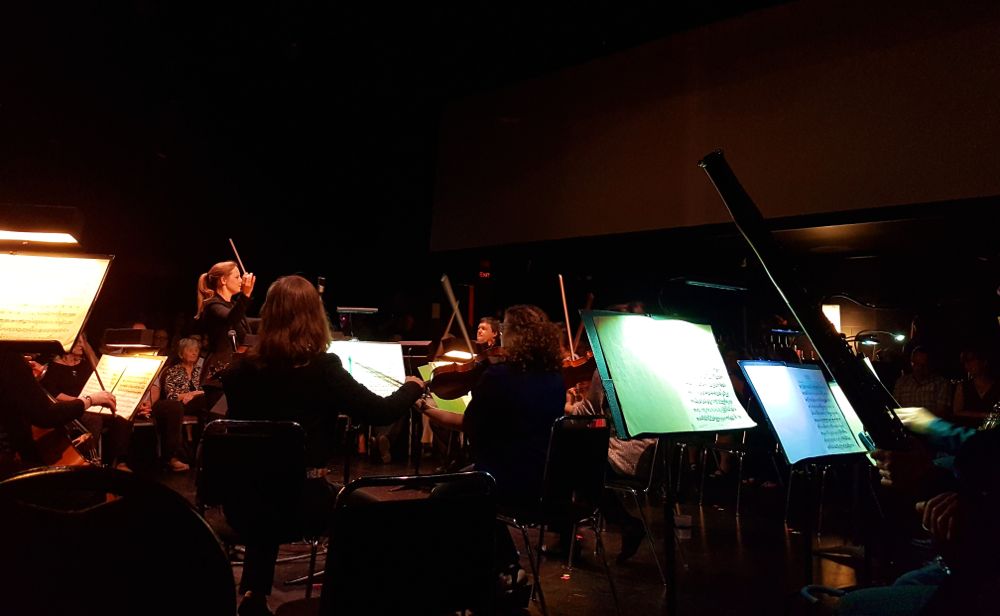 It was my first time seeing Gemma New in her leadership role – it’s historic to see HPO’s first female director, and she is one of only three female directors in Canada. Gemma is an absolute joy to watch perform. Normally from your seat in a traditional venue, with a conductor’s back to the audience, you don’t get to witness their expressions and movements as clearly. Seeing Gemma’s face light up as she gracefully and skillfully guided the musicians along, smiling at certain notes and feeling the music through her whole body made the pieces come alive all the more. You could also sense the camaraderie and mutual respect between her and the musicians. 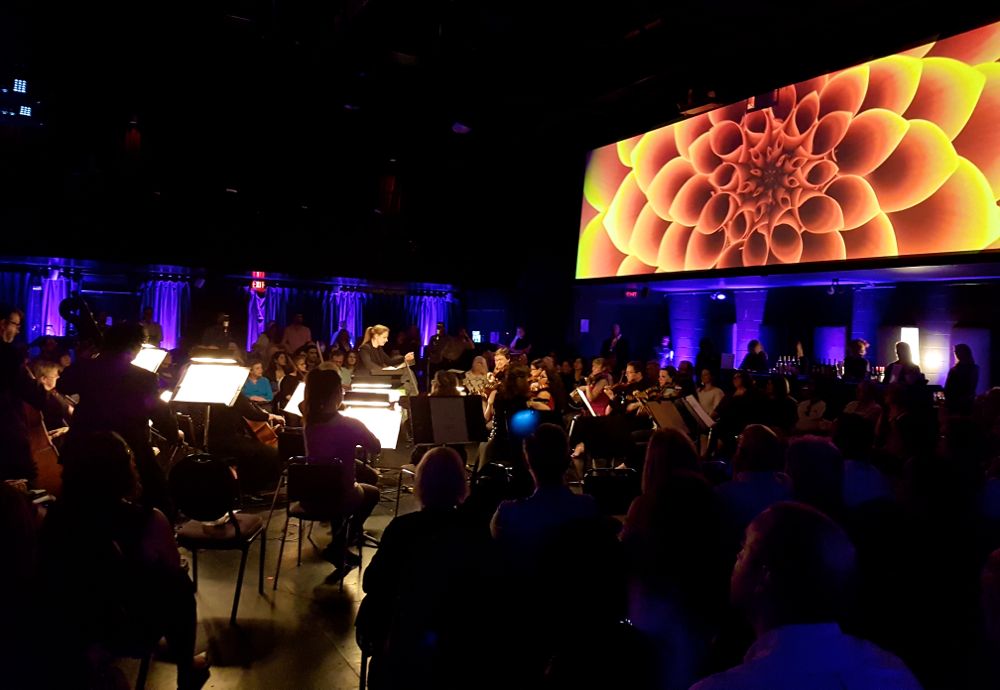 In between the music, Gemma spoke to us about the pieces and even asked a couple of the soloists what they like about what they were about to play. Gemma’s approachable and conversational demeanour and humour made the music accessible to anyone. They also made use of the entire space, having some sections positioned in the balconies – a trumpet on one side and woodwinds in another balcony corner.

Often we have an image of classical music as being serious and structured, but Gemma explained that musicians back in the day would literally be playing on hillsides and street corners. Groups of musicians would play into the night, even being trailed by “groupies,” Gemma joked – music fans who would follow them around town. The composers performed included Mozart, Bach, and Stravinsky. Diana noted that this program gives audiences a different vehicle to experience HPO’s repertoire, and become more engaged with the music in a way they might not have thought about before. 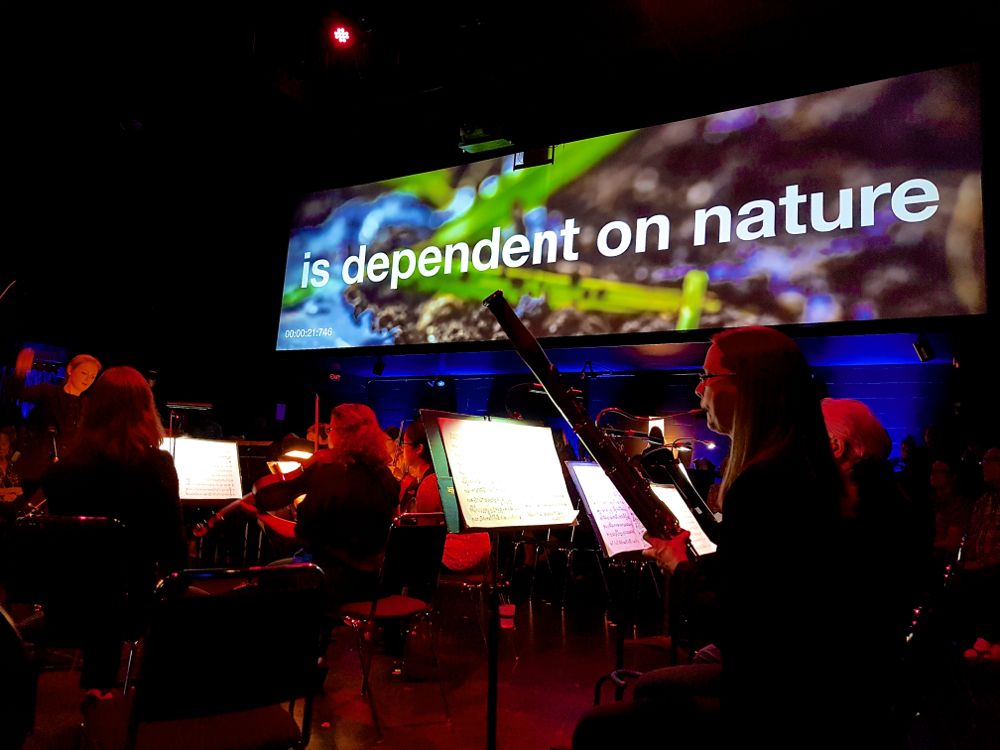 Before the show and during intermission, we experienced the music of local band Illitry, who were perched onstage where audience members were also seated. Illitry has collaborated with the orchestra in the past on HPO’s Indie Series and it continues to be an exciting partnership. Illitry created an ambient soundscape and also took a live recording of what the HPO musicians played during the first half and put it into their experimental set during intermission.

The sounds were spectacular on their own but the visual component to the show further enhanced the music. The colourful lighting was dynamic and projections on the screen showed cityscapes, Shakespeare quotations and other nuggets like “Humanity is dependent on nature for its very existence,” natural scenery, even shots of the composers themselves.

With this new interactive setup, Gemma also encouraged people to take photos and use social media throughout the show. You didn’t have to ask me twice, let me tell you! I was in my element with the live tweets, Instagram stories, and Snapchats.

In the hope of inspiring future collaborations, HPO invited some artists from the community to experience the new concept. The audience as a whole was extremely diverse – I saw my peers from creative sectors, elder HPO fans, even some former high school teachers of mine! 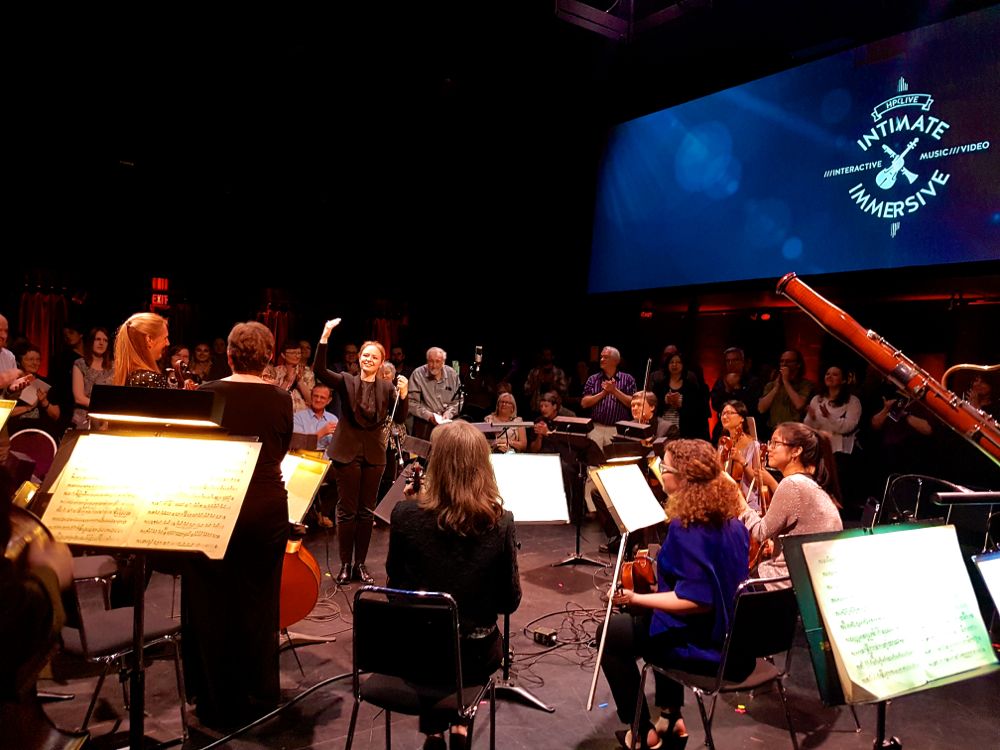 HPO will unveil another Intimate & Immersive show later this year – truly a special show that I highly recommend. In the meantime, watch for more of their programming: What’s Next Festival of New Music (May 23rd-28th) and the Indie Series featuring Hanna Bech on June 23rd.

Thank you HPO for the complimentary ticket to attend the event.

Quotes from Diana Weir were taken from our interview on 93.3 CFMU.