Every year, the Hamilton Feminist Zine Fair, organized by the Sexual Assault Centre (Hamilton and Area) — better known as SACHA — celebrates and creates spaces for marginalized groups to have discussions about feminism through do-it-yourself publishing. This year, the energizing event is taking place on the fourth floor of the Hamilton Public Library on Saturday, May 12 between 11 a.m. and 4:30 p.m.

While nobody can be quite sure when the first zine was published, zine-making was a critical part of 1970s and 1980s punk culture in cities including London, Los Angeles, and New York. In the early 1990s, they were essential to the riot grrrl movement, where DIY zines explored radical politics, feminism, and music. But what is a zine, you might ask?

According to SACHA, “a zine is a self-published book, magazine, or comic. Anyone can make a zine — using low-cost methods like collage and photocopying — to create a space for their words, ideas, images, and more. Not having to rely on traditional publishing allows for non-mainstream voices to be heard!”

This year’s Hamilton Zine Fair will feature local zines from Safer Gigs Hamilton, Broad Conversations, and a collaboration between SACHA and the Hamilton Public Library. However, many are exhibitors are coming from out of town, including Femme Crimes Distro from Montreal, Justseeds Artists’ Cooperative from Pittsburgh and Toronto, Quiet & Polite from Kitchener, Tenderqueer Art from Scarborough, and Wenting Li from Markham. Click here to see a complete list of vendors.

The Hamilton Feminist Zine Fair is an opportunity to discover new voices and perspectives that you won’t often see represented in traditional media. Elevating voices is especially important in May, which is Sexual Violence Prevention Month in Ontario, raising awareness about the devastating impact of sexual assault and focuses on the measures being taken to stop violence and support survivors. 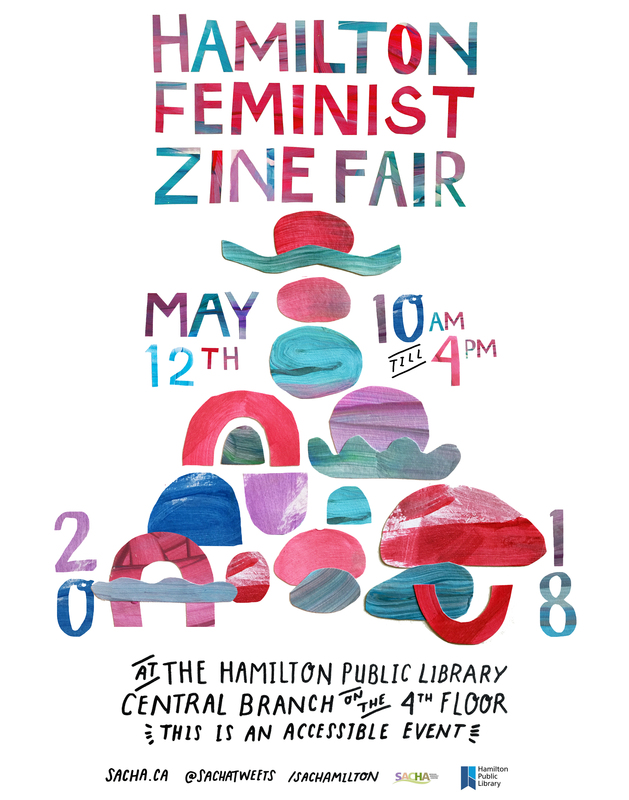