Don’t let Hamilton’s toboggan ban stop you from hitting up some of the great toboggan hills around the city. Get out there, grab the sled and hit the hills for some good old fashioned GT Snow Racing, crazy carpet tobogganing. There are four official legal “permitted toboggan hills“, plus a handful of other non-sanctioned hills that you can toboggan at your own risk. 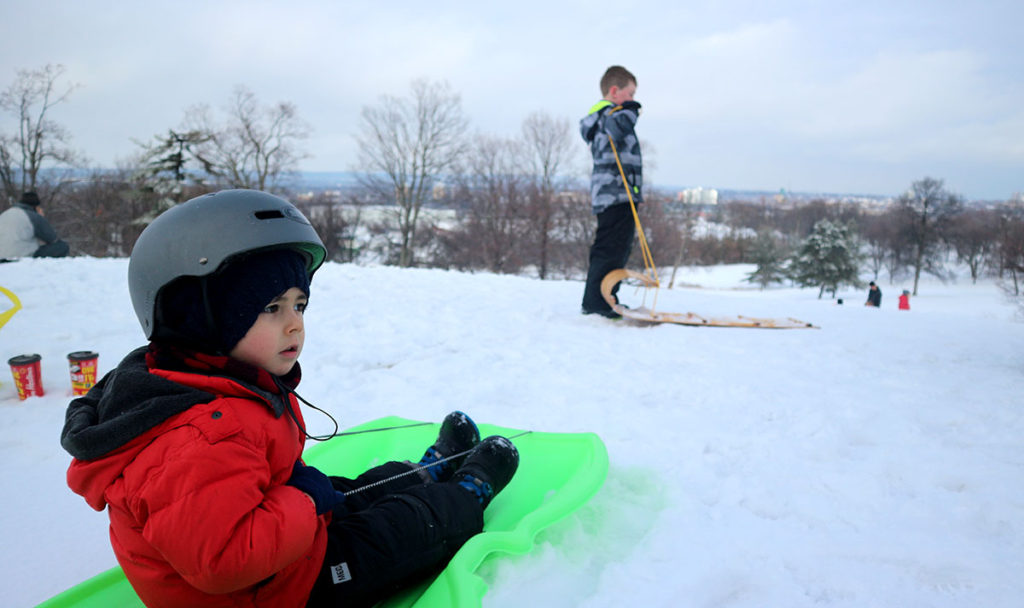 Chedoke Golf Course
Chedoke is one of four “permitted toboggan hills” in the city. It’s a great hill that has the option of a super long moderately steep hill or a crazy steep drop up at the top that joins into the wider portion of the hill about half way down. It can be a busy hill (depending on the day and weather) especially if everyone has tobogganing on their mind. It’s a great hill for the 4+ age range. The hill is located at 563 Aberdeen Avenue (turn down Studholme Road from Aberdeen and follow the road up to the top of the hill). Parking is available.

Victoria Park
Victoria Park is a downtown toboggan hill that is perfect for the little ones. It’s a mini hill that slopes towards a fenced baseball diamond that faces onto King Street. Bring the skates too (if you’ve got them) for a nice glide around their community ice-rink. Parking is available on-site (off Strathcona Avenue North).

Garth and Stonechurch Reservoir
This is a medium sized hill that is a designated “permitted toboggan hill”. Hills slope along the sides of the rectangular topped reservoir. Parking is available just east of the reservoir. 1515 Garth Street (just south Stone Church Road West) Hamilton
parking is located on the south-east side.

Churchill Park
Churchill park is situated in Westdale close to the Aviary and Churchill Community Garden. It’s a small and manageable hill like Victoria Park’s -perfect for the younger ones. The hill is situated at Marion Avenue North and Cline Avenue North (off of King Street West) just behind the club house and on the banks of the lawn bowling area.

Coronation Park
The mouth of the hill starts up at Paradise Road North and slopes down toward Coronation Pool, which is fenced in at the bottom of the hill with a small sloping hump of hill that (mostly) prevents you from bumping up against the fence of the pool. Parking available via Macklin Street North. The hill itself can be found between Paradise Road North and Macklin Street North.

Greenhill Reservoir
Greenhill Reservoir has a similar hill structure as many of the other reservoirs. However, only two sides of the reservoir are good for tobogganing. The north west side being steeper than the west side of the hill. The hill is located on Greenhill Avenue towards the escarpment just south of the train tracks (between Tommar Place and Summercrest Drive).

Get out there and enjoy the winter on some of these sweet hills. Did we miss any of your favourite toboggan hills in the city? Leave a comment below or tweet us @theinlet_!