Venturing out to the great unknown and starting something different is scary. Change is often hard and stepping out of our comfort zones seems to bring most of us some degree of anxiety. This is not the case with Hamilton’s multi-disciplinary artist, Devin Bateson. In fact, he embraces change and all that it brings. Devin is releasing a new album this week (available here) and was kind enough to speak to us and shed some light on his creative process.

Most people may be familiar with Devin Bateson from his work as a stand-up comedian. He has been a fixture at Hamilton’s popular open mic nights at Levity (Previously Yuk-Yuks), at the Staircase Theatre and other spots around town. To some, Devin’s stepping back from stand-up to focus on music was a surprise but Devin says that it was time to try something else.  Describing the Hamilton comedy scene, Devin says “It can be tough because it is a small pool of comedians and it’s a lot of dudes being shitty. And there are a lot of shitty dudes in the Hamilton comedy scene. There are not enough women or people of colour and there totally needs to be. It’s just not welcoming to those people. It is welcoming to dudes. Straight dudes. They don’t have to be white – but it helps. Some of the funniest people I know are women. And I only want to encourage women to pursue comedy. I feel like I’m a straight white dude – we’ve seen enough of me and my type. Maybe there is room for someone else.” 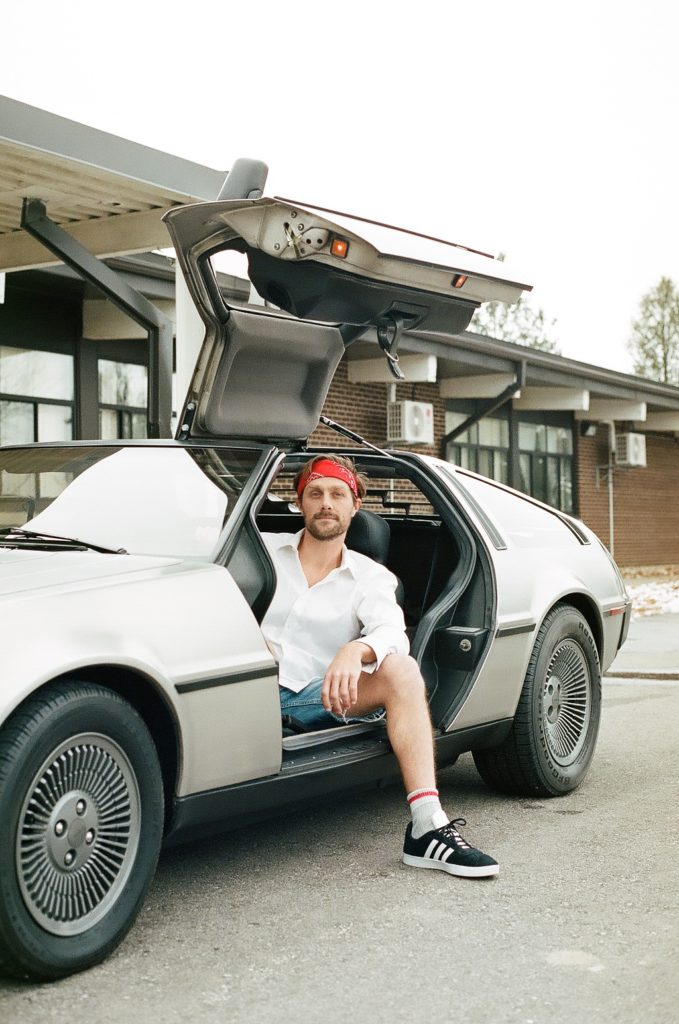 The leap from writing stand up to writing lyrics seems natural. After all, in order for both art forms to be successful the artist needs to create a believable and authentic narrative in a short amount of time. As audiences we want to be taken on a journey – or to be shown a new world or a new perspective in a short amount of time. The foray into writing rhymes and poetry over stand-up was a positive mental health and personal growth move for Devin. “In comedy every painful moment of your life becomes a joke and that sucks because you’re not gonna actually work through your problems making it a joke. Because some things, even though they can be funny – a lot of things are just painful and you have to know that. To start making jokes out of painful ideas is just hurting your own feelings. Or I was, anyway. To be able to say it in prose live is freeing. I’m allowed to be sad or tell sad things and people recognize it as a song. Instead if it was stand up – people are just like ‘that’s just a sad man being sad in front of me! I came for comedy’, with rap it is a poem and that’s what I like,” Devin recalls. “I can write stuff and look back and be like ‘oh my god is that what I was thinking at that time. I had no clue! And now I get it.” This sort of honesty is partly what drew Devin to rap music in the first place. “You either have to enjoy the noises you are hearing or the truth in the song. Truth in lyrics. Give me a lot of lyrics all at once  – that’s why I love rap so much. It gives me a whole story in a short amount of song. Rather than like in a non rap song – it takes a long time to tell me a small feeling. Rap is like – here is an essay and here is my heart.”

Music has been a part of Devin’s life for about 10 years but it was kept mostly secret. He found himself taking breaks from writing stand-up material to write a few rhymes to get his creativity flowing and eventually he found that he wanted to do more and more of that and not just secretly. “Over the past few years I’ve learned I have to be more confident with myself in the world and I can’t hide things about myself, especially if I want to do them. So I decided I’m going to tell people I rap and stop doing it secretly,” he says. What started off as Devin writing rhymes over soundcloud beats turned into him purchasing a Roland SP404 and diving down the sampling rabbit hole, “It’s the coolest thing ever. It’s taken over all of my creative energy and it has gotten me back into vinyl and cassettes.” This sort of tinkering with beats and samples lead to a few bandcamp releases and eventually paved the way for Devin’s newest album, Ossiscope. The name Ossiscope is a combination of ‘ossicone’ (a giraffe’s horn) and ‘oscilloscope’ (a machine that measures electronic waves). The term represents Devin looking back at himself through a better perspective through the electronic music. “I’m at the top of the giraffe looking down and seeing who I am. I’m a weirdo, and here we are,” he explains.

What comes across most while speaking to Devin is the dedication the D.I.Y. work ethic and careful attention to detail that went into the process. For example, it was important to Devin to create a rich bed of sound that exists in the songs. Beneath the layers of beats and vocals and samples exist layers of ambient noise that were recorded out in the world. This sort of detail adds a lot of atmosphere and ambiance to the music. This was inspired by Devin learning about Bernie Krause; a musician and sound ecologist. Krause worked on the soundtrack for Apocalypse Now and was fired 8 times and this lead to him leaving the field to become a bio-acoustics specialist who now records nature sounds for science. Devin read several of Krause’s books and then applied the principles to his own work. For example, “I have a song about being high at Ikea and it’s called Hikea. It’s got truthful lyrics about me freaking out about relationships and stuff. Is this all we are? Buying crappy furniture and you’re trapped in there and you just want to eat delicious Swedish meatballs. I got some sounds in the store and that’s underneath the song,” Devin says. “I also went to the York Boulevard graveyard and brought my recorder and got some sounds there. It’s nothing really but it is there and at some point a train goes by in the distance. I loved that.” 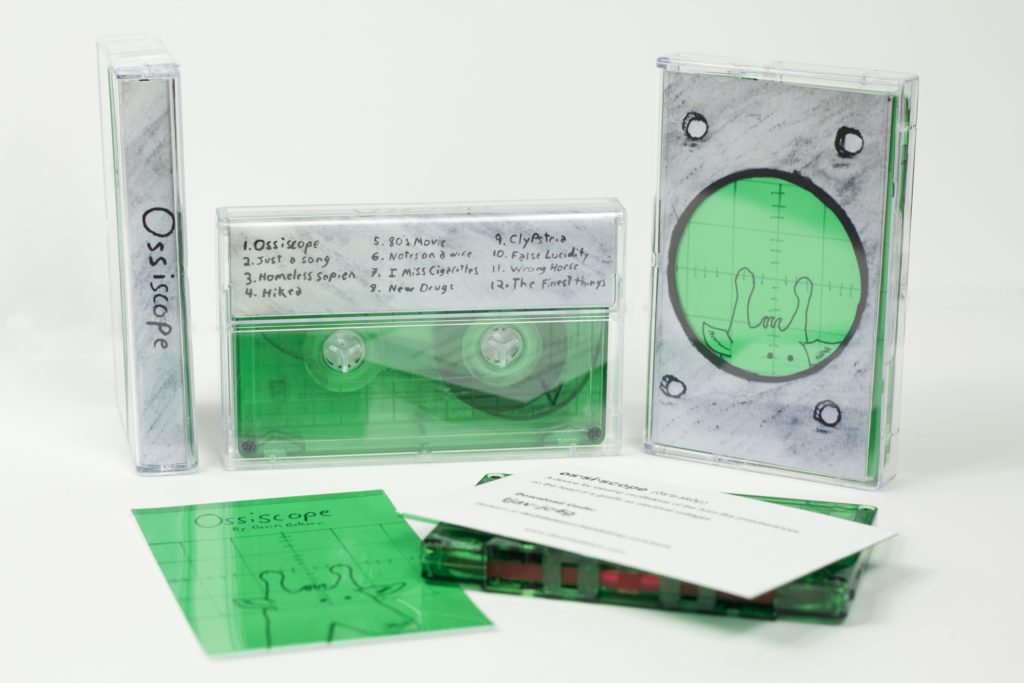 Ossiscope was recorded in the D.I.Y. spirit by Devin at home on a cassette recorder be bought on Kijiji. “I bought it for $50 and it was broken. I tried to fix it and I couldn’t . So I found another guy on kijiji who was selling one so I asked if he could fix mine and he said yes. I talked to this old German man on the phone and I brought my machine to a friend of his who took it to him in Kitchener and I picked it up form the same guy and paid him. So I never met the guy that fixed it. It was all built on trust. That experience was cool and it made it more mine at the end. It brought other people in and that guy had no idea I was making weird hip hop.” Other people were brought into the project in serendipitous ways. Jackson Darby of the Hamilton-based experimental electronic pop group, Persons, had recently purchased a lathe to cut vinyl and was looking for friends to do test cuts before starting this business, Personal Touch Vinyl. Devin was able to get his single “80’s Movie” cut on a 7”. Ossiscope is being sold digitally through bandcamp as well as through a limited run of cassette tapes that include hand drawn sleeves and art done by Devin. 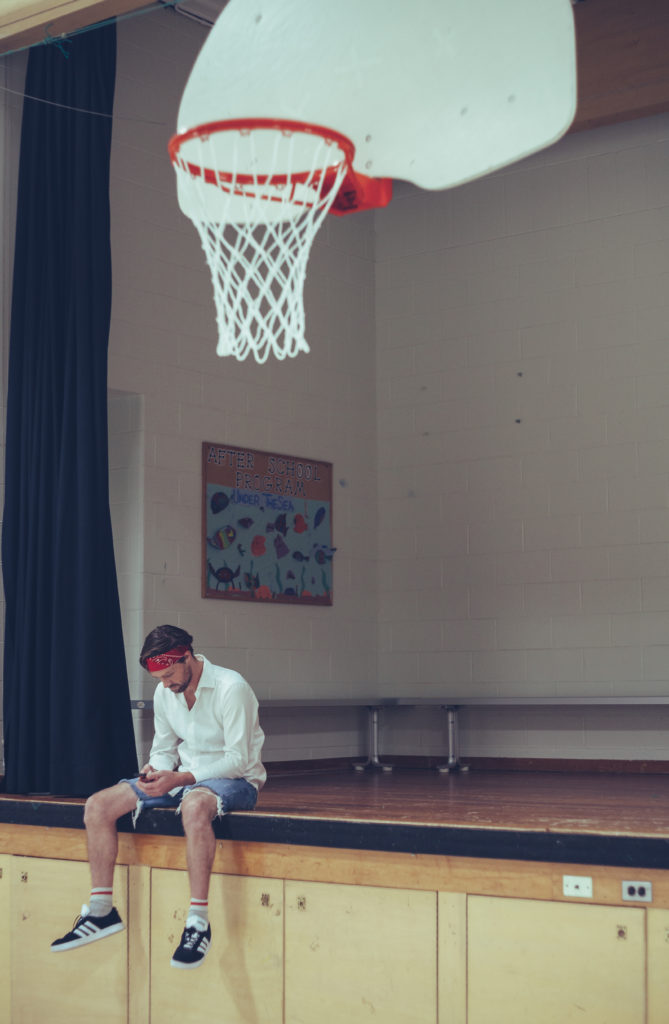 After speaking to Devin for any amount of time it becomes clear that he is in touch with himself and is generally positive and excited about the things he does. When asked about this and the juxtaposition between the positive attitude and the often curmudgeonly stand up comedian image that he has had in the past Devin leaves us with this anecdote. “I had a hard time with Hydro One. I was trying to pay a bill and was too poor to afford it and I called them to say that and they sent me through the line of bureaucracy and it was so frustrating. I thought I could just lay down and die and this company would not give a fuck. I was so brokenhearted and I try to look at that moment now and think: ‘don’t forget there are good things in your life and don’t let hydro one destroy your will to live’. It’s the simple tasks that society has built that always break my heart. I’m like ‘don’t let them break your heart, only you can break your own heart’. That’s my job! That’s where my positivity comes from. I want to do good for myself and I would love to see everyone do good for themselves. I don’t want anyone to have a hard time. I’ve been through hard times and they suck.”