Archives ALIVE, hosted by McMaster University archivists at the William Ready Division of Archives and Research Collections, is a regular series of drop-in sessions that counters the idea that archives collect “dead stuff” — dusty boxes and things that live in vaults.

“We want people to begin to engage with some of the archival materials and to interact with them and to feel like they’re living documents,” says Gillian Dunks, Archives Arrangement and Description Librarian at the division, and a co-creator of the talk series. “They’re something that people are still sort of working upon, researching with, and I think they’re very important to the scholarship on campus.”

The William Ready Division of Archives and Research Collections is the principal repository for rare books, archives, antiquarian maps, and related historical material at McMaster University, welcoming specialized scholars from all over the world who are interested in the division’s strong collecting areas, including Canadian literature and publishing and pacifism and peace movements. The archives are open to the public; however, for some, accessing archives for the first time might feel intimidating, a feeling Archives ALIVE hopes to reduce.

“The barrier to starting with archives can be a lot higher [than the division’s rare books collection],” says Bridget Whittle, Digital Archives Librarian. “Rare books, at least, you can appreciate them for their typography or their beautiful plates.” Archives ALIVE is an opportunity for people who aren’t subject specialists to engage with the archives and research collections. The series has two components: A “highlight” series and a “spotlight” series.

“We do a monthly session where we invite people in and show them highlights — things that we have found in our experience people are very excited about interacting with,” says Dunks, noting that some materials might include rare books and writer Farley Mowat’s research journal (mosquitoes still squished inside).

“We also have a series of more focused talks. Those are sessions that are targeted at more specific communities within campus and in the Hamilton region. Those talks have been a good opportunity to bring in people who are not necessarily affiliated with the university but who we think might enjoy aspects of the collection.”

The first Spotlight session took place in November, exploring wartime propaganda. From selling war bonds and collecting scrap, to recruitment and anti-espionage campaigns, it looked at how governments used propaganda on their own people and their enemies in the two largest conflicts of the 20th century. Whittle says these specialized talks are “a way to kind of give people a quick crash course in either a subject area or a particular collection so they can really enjoy them and look at them and bring their own knowledge.”

To begin 2020, the Archives ALIVE has three scheduled Spotlight talks (with more to come!) beginning with Little Books of Lovely Verse: Canadian Poetry Chapbooks on Thursday, January 16. In this session, Dunks will lead session attendees through an early era of Canadian publishing, in which chapbooks were inexpensively produced as an economical way to print poetry. These diminutive books preserve the voices of many emerging and established writers and provide a window into the contested space of Canadian literatures. She’ll explore what genres and perspectives were privileged and how beauty was conceptualized in both design and verse. This talk, she hopes, will appeal to writers, those working within the small press scene, and anyone in the general public who are interested in literature and publishing.

When Dunks, whose thesis for the University of British Columbia was called “Reading the field of Canadian poetry in the era of modernity: the Ryerson poetry chap-book series, 1925-1962” began working at the division, she was curious about the repository’s chapbook holdings.

“I went and started poking around the stacks and discovered we have quite a bit,” she says, noting that the division broadly has strengths in Canadian publishing, including archival collections from publisher McClelland & Stewart, capturing a time when there was “a lot of enthusiasm broadly in the Canadian cultural landscape for creating and fostering a uniquely Canadian literature.” “Some of these names I’m noticing are not so familiar for students anymore,” she says, “but we have the archive of Margaret Laurence, who published The Stone Angel,” among many others.

Dunks says that Canadian publishers and Canadian authors had a “very rocky start because of very prohibitive and difficult copyright laws” which resulted in little money for the fledgling industry to publish Canadian authors.

“What’s interesting is people turned to chapbooks as a way of developing a Canadian poetry in a way that was economically viable and sustainable,” says Dunks. “If Canadian publishing in general was a difficult endeavour, Canadian poetry was an even more difficult, albeit sort of impossible, endeavour, because poetry is not a lucrative mode of production, even now.”

The William Ready Division of Archives and Research Collections chapbooks collection includes many examples from the 1920s-1960s, a time before government funding for small presses. One significant series is the Ryerson poetry series, a self-funded model of publishing that boasted a small print run and published 200 volumes, publishing names that we still think of as significant Canadian poets, like Leonard Cohen.

“Chapbooks in general tend to have some similar characteristics that unite them physically,” says Dunks. “They’re often small, made from a single sheet of paper, folded multiple times.” Two common ways of binding, both very cheap, are stitching or staples. They’re a “beautiful little format, and they’ve carried on into the 20th century,” she says, noting that a number of small presses have economically viable chapbook series. Some poets use chapbooks to self publish their own work.

“Poets are saying they’re tired of the bureaucracy of poetry. I’m tired of looking for legitimacy from publishers. I’m tired of this sort of process of having to send out my poems and receive rejections,” says Dunks, adding that anyone with access to word processing software and a printer can produce a chapbook. “When you have a genre that is flexible and to some extent dependent on authorial labour and finances, what it can mean is that you’ve removed all these sort of barriers in terms of legitimacy that we sometimes have in literary circles.”

What’s interesting about chapbooks, and other print ephemera like Broadsides and manuscripts that will be highlighted in the talk, are whose voices are being privileged.

“The Ryerson series has gender parity which is quite interesting because that’s not true of publishing scenes that are happening concurrently,” says Dunks. There are a lot of different voices in these formats.”

The next Spotlight session will be Medieval Manuscripts: Book of Hours, hosted by Whittle, on February 12. A popular and meticulously conserved item held by the archives, the Book of Hours would have been a cherished prayer book owned by a woman in medieval France.

“It would have taken hundreds of animal skins to make, never mind a team of people,” says Whittle. “The poems are written in the female form because a woman would have been praying, which is a nice touch in history when so rarely do women’s voices even get considered,” she says.

On March 14, the series will spotlight the archives of Basil Johnston, an Indigenous writer and scholar who passed away in 2015. He donated his archive to McMaster because he wanted his knowledge, specifically about the Anishinaabemowin language, to be accessible to Indigenous students on campus and those affiliated with McMaster’s Indigenous Studies Program.

“I think archives have a lot of connections with colonial history. Archives have sometimes been associated with in the western tradition as the record keeping apparatus of colonial government,” says Dunks. “It’s a neat thing in this space to have Basil Johnston, who was often collecting narratives and writing in Anishinaabemowin and countering colonial efforts to suppress and wipeout Indigenous language. It’s a very powerful legacy to have here.”

Archives ALIVE is an opportunity for the division’s staff members to share their excitement and knowledge about holdings in McMaster’s collection. “Archives work requires you to know a lot about a lot of things, but we all come to it with our own particular areas of interest,” says Whittle, who is excited to learn from other members of her team.

For both Dunks and Whittle, Archives ALIVE is about the personal connections fostered by reducing barriers and welcoming more people into the space, while also highlighting people and movements that are sometimes erased from history.

“The thing I’ve been noticing as we do the series is how personal the work is. I find, in general, that a lot of the job of being a librarian or archivist is about relationships,” says Dunks. “Some thing I think about when I do work is relationships that I have with records, and by virtue of records, past creators of records. For me, the work is always very personal and very intimate. When I’m looking at somebody’s archive, I’m thinking about who they were and how they would have wanted their papers to be arranged. What’s interesting about bringing other people in who maybe aren’t working with records in the same way is that they’re still finding those connections.”

In particularly, when hosting the session on World War propaganda, Whittle and Dunks note that many people wanted to talk about family stories, which is made possible when people are granted access to spaces and archives they might otherwise not see.

“Part of what we do is not just facilitating access to records but providing a space for people to talk about cultural memory,” says Dunks. 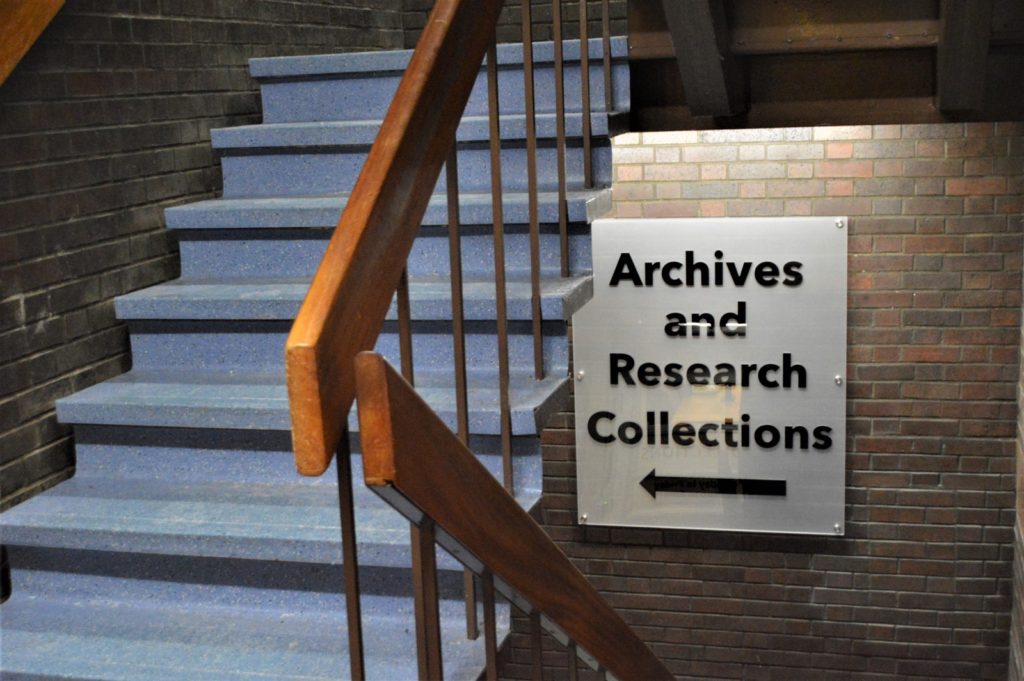 Highlights from the Collection:

Spotlights from the Collection:

Highlights from the chapbook collection: 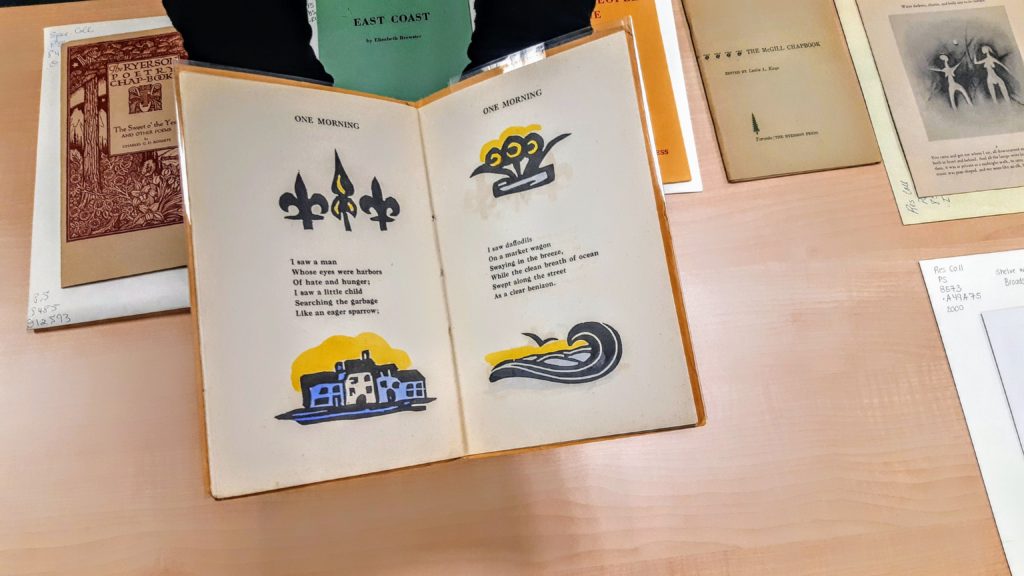 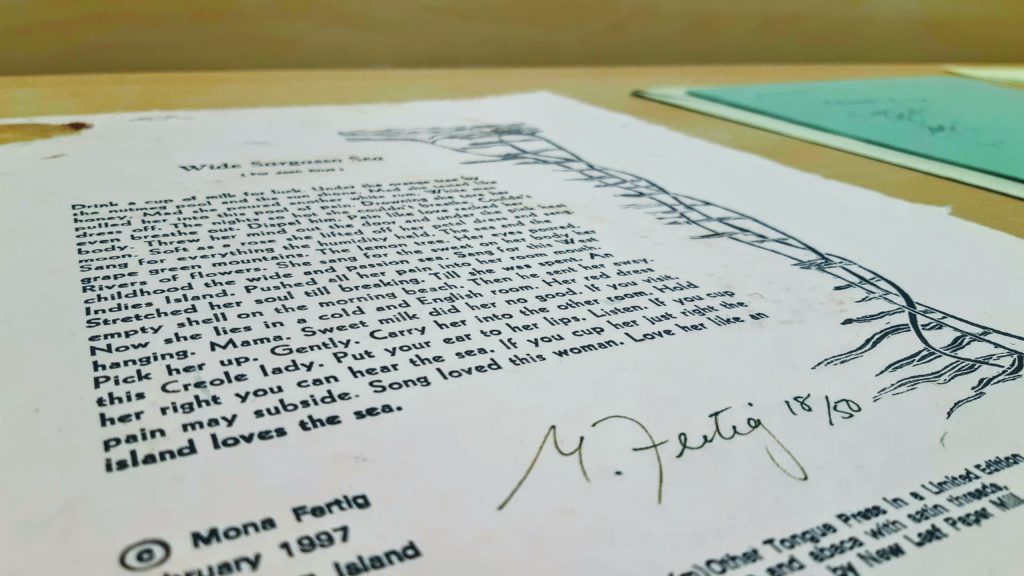 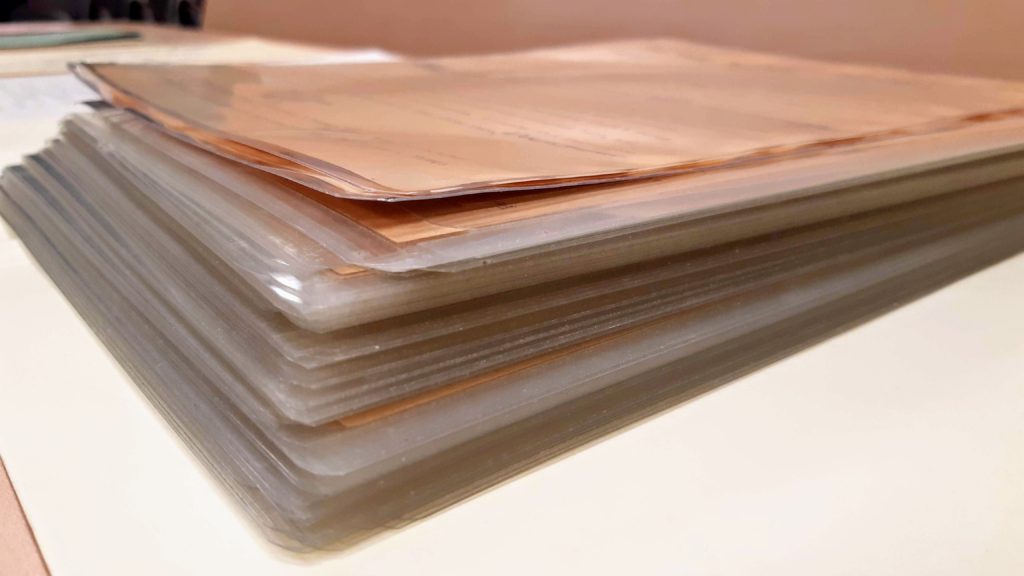 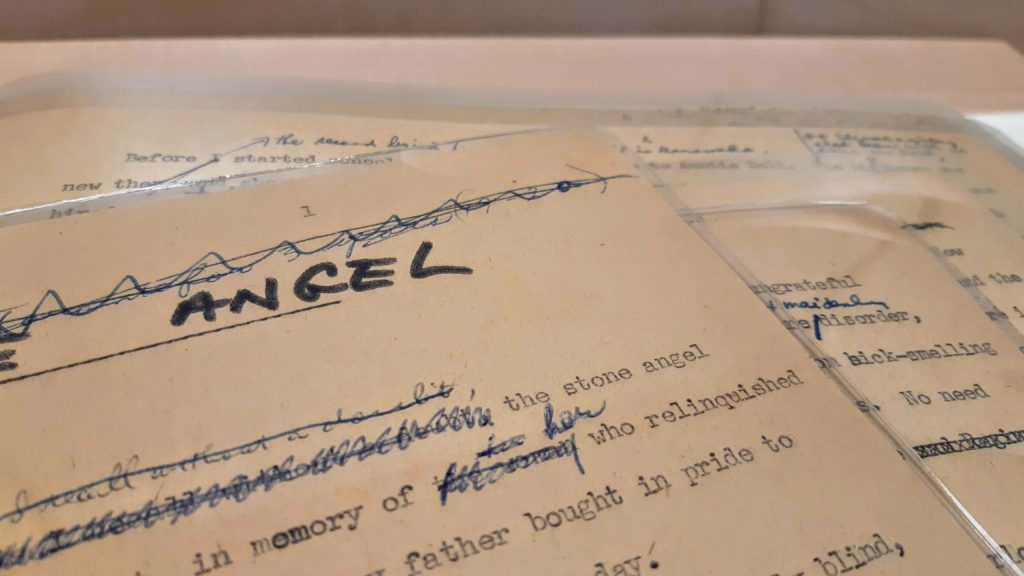