Get ready, film buffs! It’s time for Hamilton’s annual AGH BMO World Film Festival. Running from Oct. 13th-22nd, you’ll be entertained by a number of film screenings, talks, panel discussions and performances at various venues. You may purchase single tickets, a 10-pack of tickets, or a Film Lover Pass to make the most of your festival experience. Take a look at the schedule to plan your festival route.

To get you started, we compiled our top film picks from this year’s festival. (We’re also giving away a pair of tickets to one of our picks – keep scrolling to find out!) 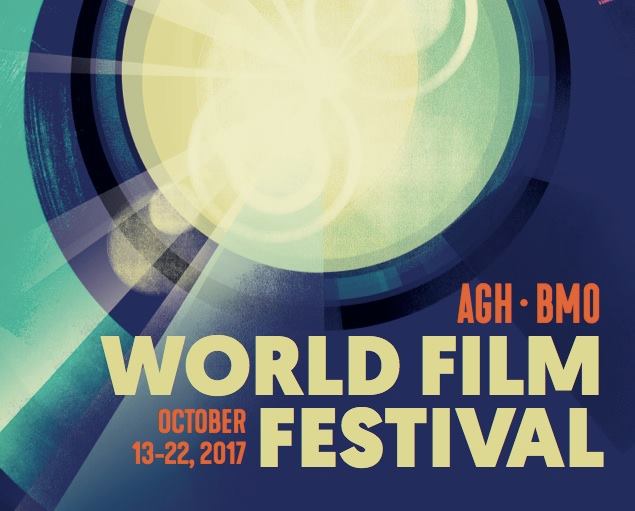 Thelma
Friday, Oct. 20th, 9:30pm
Venue: Lincoln Alexander Centre (160 King Street East)
I’m a huge fan of horror/thriller genres and I’ve had my eye on Thelma for a little while now. I was very excited to learn that it would be a part of the AGH Film Fest. This film is about a girl living in Oslo who discovers she has terrifying supernatural powers. As a general rule, Scandanavian scary movies are usually really good. This movie is being shown right in the heart of scary movie season which is perfect. Watch the trailer (with the lights off) for this one. (Biljana)

Loving Vincent
Opening Night Screening
Friday, Oct. 13th, 7:00pm
Venue: Lincoln Alexander Centre (160 King Street East)
65,000 frames in oil paints on canvas board from 125 painters make up the masterpiece that is Loving Vincent. It took over 6 years of creative development and 1345 discarded paintings and is the first fully painted animated film. The movie centers around the mystery of how Vincent Van Gogh, a little-known painter in his time, came to be shot. I personally have been wanting to see this movie for years (since my sister tipped me off to it). Being an artist who loves Van Gogh’s work, this is the ultimate film. (Heather)

Dawson City: Frozen Time
Sunday, October 22th, 7:00 pm
Venue: AGH Annex (118 James Street North)
As a lover of history with an affinity for grainy black and white movies, I was immediately drawn to Dawson City: Frozen Time. This documentary explores “the bizarre true history of Dawson City’s long-lost collection of 533 nitrate film prints from the early 1900s.” It brings together rare silent films, newsreels, and interviews to shed light on the unique history of cinema in Dawson City, Yukon, a place that has been firmly planted on my bucket list for years. (Jessica)

Mean Girls
Friday, Oct. 20th, 8:00pm
Venue: Collective Arts Brewing (207 Burlington Street East)
Imagine if this was screening on October 3rd? Close enough; I’ll take it. Hard to believe it has been 13 years since Mean Girls was first on the big screen. It still remains one of the most quotable adolescent movies of my generation (you go, Glenn Coco!), and immortalizes Lindsay Lohan at the height of her teen career. (Kristin)

Lemon
Saturday, Oct. 21st, 9:00pm
Venue: AGH Annex (118 James Street North)
Lemon seems like an absurdist comedy about a fully grown man who is feeling like the world is against him. This would be a good fit for fans of Curb Your Enthusiasm. It is exciting to see comedian Brett Gelman in a starring role. (Biljana)

The Trip to Spain
Tuesday, Oct. 17th, 7:00pm
Venue: Lincoln Alexander Centre (160 King Street East)
As a foodie, I’m sure you could guess The Trip to Spain would be on my radar. You’ve seen them in Northern England, you’ve seen them in Italy, and now get ready to see Steve Coogan and Rob Brydon take Spain! The hilarious duo will sample restaurants and hotels from across Spain, as they deliver amusing banter and entertaining jokes over and between meals. (Heather)

Whose Streets?
Saturday, Oct. 21st, 4:00pm
Venue: AGH Annex (118 James Street North)
A documentary about the Ferguson uprising told in first person by the people who lived it. This film looks at how the killing of 18-year-old Michael Brown inspired a global movement. As we become aware of more and more black people falling victim to police brutality it can be overwhelming to keep up with the onslaught of video and news stories. Whose Streets is a good chance to slow down and look at the details of this crime and the action that rose out of it. (Biljana)

Rocky Horror Picture Show
Friday, Oct. 20th, 10:00pm
Venue: Collective Arts Brewing (207 Burlington Street East)
I haven’t seen Rocky Horror with an audience since I was in high school. The shared experience of being among fans of this musical, campy cult classic makes it even better (and even more fun if you dress up!). There are some really exciting new releases as part of this festival lineup but I like the inclusion of some old favourites too. (Kristin)

Citizen Jane: Battle For The City
Saturday, Oct. 14th, 4:00pm
Venue: Lincoln Alexander Centre (160 King Street East)
This timely documentary tells the story of legendary writer and urban activist Jane Jacobs’ battle to save historic NYC neighbourhoods from the draconian redevelopment plans of ruthless power broker Robert Moses in the 1960s. Development, gentrification, and inequality are subjects that are more relevant than ever today. This documentary about the badass Jane Jacobs is sure to be inspiring. (Biljana)

Integral Man
Thursday, Oct. 17th, 7:00PM
Venue: AGH Annex (118 James Street North)
Integral Man is a movie I’ve wanted to see since it premiered last year at Hot Docs. This documentary is about the man behind one of the best houses ever designed in North America: James Stewart. Stewart wrote THE book on calculus, giving him both fame and fortune. He has a Hamilton connection too. Not only was Stewart a professor at McMaster, he was also a former violinist for the Hamilton Philharmonic Orchestra. He hand selected the uber-talented Toronto firm of Shim-Sutcliffe (the commission almost went to Frank Gehry) to design his house devoted to his love of music and mathematics. Don’t miss this doc about an intriguing, brilliant, one-of-a-kind man and his intriguing, brilliant, one-of-a-kind house. (Thomas)

A Bag of Marbles
Thursday, Oct. 19th, 7:00pm
Venue: Cineplex Cinemas Ancaster (771 Golf Links Road)
A Bag of Marbles tells the account of two Jewish brothers evading the Nazis during war-torn WWII Europe. The boys, Joseph and Maurice, travel through France alone, beginning in 1941 – and leave their childhood and everything they know behind. The foreign film is based on the autobiographical novel by French Jewish author Joseph Joffo, and is sure to be a heart-wrenching film. (Heather)

Brigsby Bear
Monday, Oct. 16th, 9:00pm
Venue: Lincoln Alexander Centre (160 King Street East)
Like many Saturday Night Live alumi before him, Kyle Mooney takes to the silver screen. The current SNL cast member often plays innocent characters in surreal situations, and it looks like this film features just that. After finding out his beloved childhood TV show was made only for him, James (Mooney) sets out to finish the storyline himself. The film also stars Claire Danes, Greg Kinnear, and Mark Hamill. (Kristin)

The Inlet is also excited to come aboard as a sponsor of Brigsby Bear on Oct. 19th at Lincoln Alexander Centre and we are giving away 2 tickets to see the film!

Send an email to theinletnews@gmail.com with the subject line “Brigsby Bear” for a chance to win. Winner will be chosen at random and notified on Oct. 12th. You will pick up your tickets at the screening.

Images are courtesy of the films. Visit the official schedule for more information.